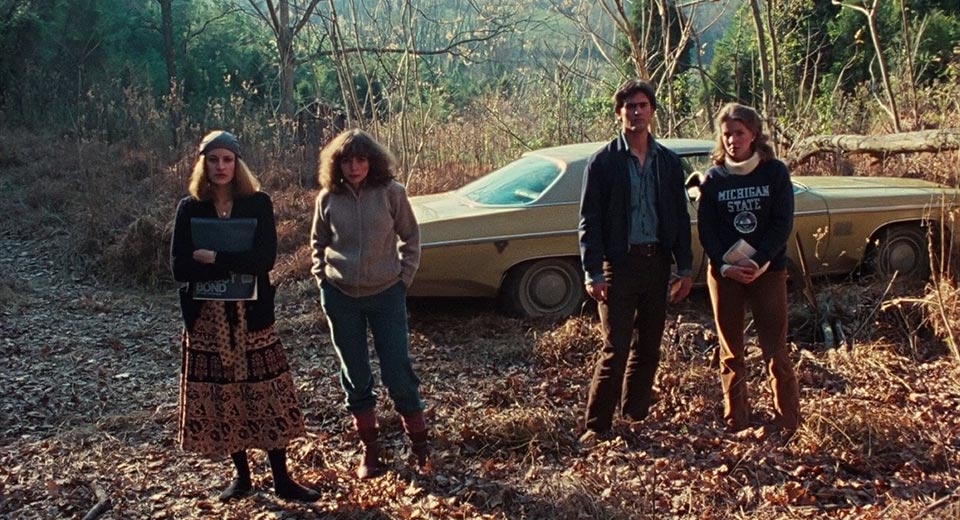 Over three decades and a sprawling media franchise later, revisiting the visceral thrill of Sam Raimi's original The Evil Dead is like realizing your parents were once hip youths — hard to recall with the accumulated weight of years, and easy to overlook if you never saw them in their prime.

Mostly lacking the goofiness of later sequels, The Evil Dead earns its spot in Quad's Rated X series through unrelenting, inventive violence against five college students weekending at a cabin in the woods. Ashley, his girlfriend Linda, sister Cheryl, and friends Scott and Shelly play a recording left in the basement by a professor of archaeology, a spoken incantation from the Naturam Demonto, the Sumerian Book of The Dead. It unleashes evil spirits the recording warns "may lie dormant but are never truly dead," giving them license to possess the living, and turning the film's remaining runtime over to gleefully sadistic abuse that eventually zeroes in on Ash. Roger Ebert called it a very pure film, acknowledging "it doesn't waste time on characterization, needless dialogue, or any meaning whatsoever!" though that ignores the earnest romance Ash feels towards Linda, and his conflicted feelings of remorse he feels once she's transmogrified into a screeching demon.

You really haven't lived as a female critic and horror fan until you've forced your eyes to scrape disgraced former movie blogger Devin Faraci calling the film's notorious tree rape scene "problematical in general." For something made during the slasher heyday, it's the closest thing to sleazy in the entire film — The Evil Dead is firmly corporeal, not carnal, in its bodily abuse, with blood and guts every clotted color of the rainbow spewing forth and dousing Ash. The film skews far more psychological than sexual, even tapping Cocteau's Orphee with a mirror special-effect capper to a bravura slow-burn basement scene terrorizing Ash with quiet blood.

The film crackles with low-budget energy, its infamous zooming "shaky cam" shots imitated but never as intense as here, every tormenting moment of its brutal shoot reading loud and clear through the screen. Raimi's black humor shines through as Ash is stabbed, slashed, and repeatedly driven to the brink of madness for his and our entertainment, a Job with no hope of a benevolent God. The film's audacious final shot is the perfect nihilistic capper to ring out 2018 — like the passage of time, attacks by the Evil Dead are inevitable and coming for all of us. Happy New Year, everyone!