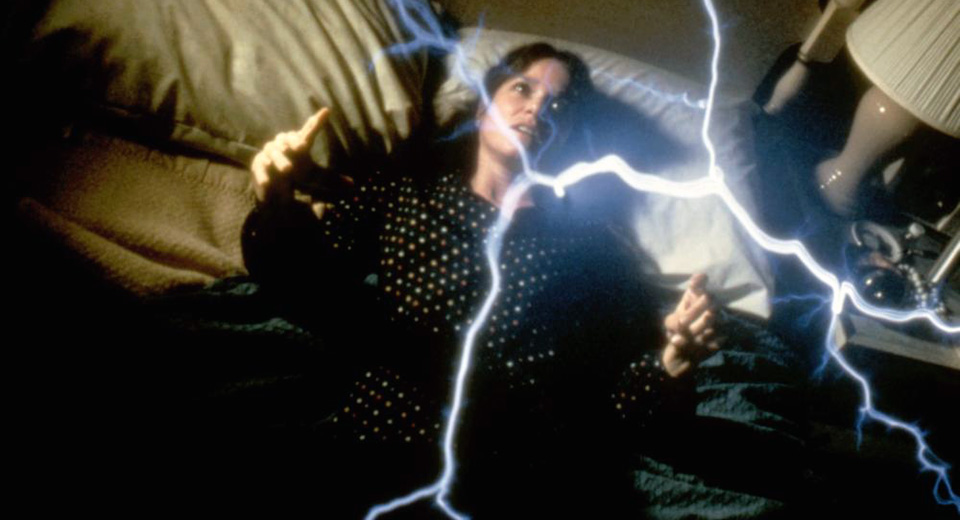 The Entity  opens with a rapid-fire introduction to Carla Moran (Barbara Hershey) revealing that she is a single mother of three, struggling to pay the bills while working during the day and completing a typing course at night, dependent on her eldest son to run the household while she is away. Then, at around minute six of the film, Carla sits at her vanity to prepare for bed, and is violently attacked and raped by an invisible force—the "entity" of the title.

Based on a "true story," the film presents Moran's torments without prejudice: her body is flung ragdoll-like about her home and visibly molested; the gas pedal is shown to be inexplicably engaged despite Moran's efforts to hit the brakes; blinds fly off window frames and perfume bottles explode in her bedroom. It's a uniquely suburban ghost story that relies on Hershey's haunting performance (see Peter Tscherkassky's "Outer Space" for a terrifying tribute) and special effects to demonstrate the presence of the malevolent, rather than on mysterious, write-offable occurrences or creaking floorboards to build a ghostly atmosphere.

At the same time, the symbolism of the haunting is undeniable. When Moran greets her teenage son at the beginning of the film, their relationship is shown to be intimate and structured like a marriage, a stability that she struggles to find with her oft-traveling boyfriend. Moran looks at the walls and furniture of her home with palpable terror just moments after explaining that she has missed a month of rent and cannot break her lease. As her psychiatrist explains, the ghost is "big and strong" with "two little helpers," mirroring her own children. Then the paranormal investigators step in, and the battle shifts to one between two University-sanctioned methods: psychiatry and the supposedly more-scientific parapsychiatry, with its complicated instruments and reliance on measurable, demonstrable "facts." But the film stays true to its tortured protagonist throughout, as she is manipulated by forces seen and unseen, supposedly helpful and blatantly destructive.

The Entity screens on 35mm tonight, the first film in Nitehawk 's "Because I'm Evil" midnight series. Featuring one of the most terrifying soundtracks in horror movie history and an insanely over-the-top concluding set-piece, and anchored by Hershey's enthralling performance, it's perennially disturbing—and disturbingly underseen.