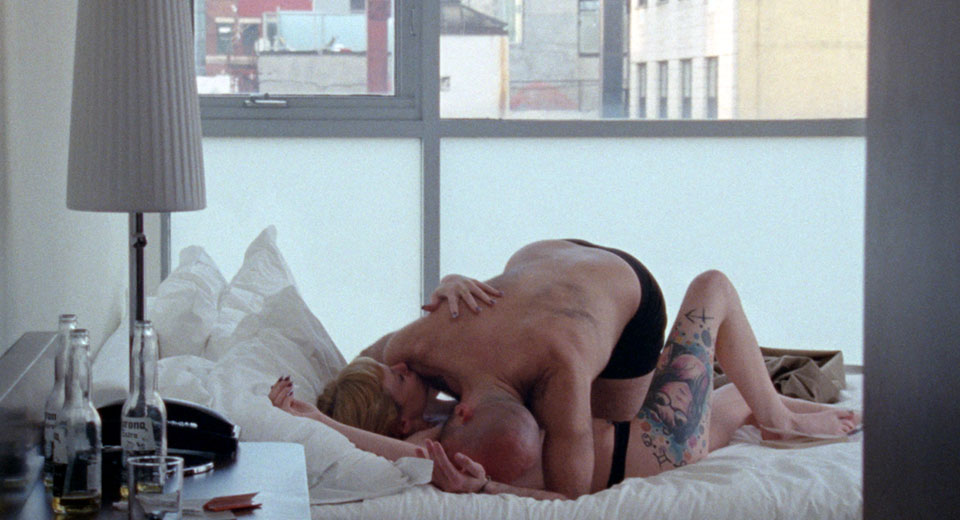 A hybrid documentary by  Brooklyn-based filmmaker Jeffrey Dunn Rovinelli made in close collaboration with its subject and star Em Cominotti , Empathy  is an artful and intimate portrait/self-portrait of Em, a professional escort from Pittsburgh struggling to overcome a heroin addiction and survive from gig to gig.

The subject of sex work is approached with both a casual, matter-of-fact frankness and respectful remove. Rovinelli uses extended, often static, long takes and extremely precise compositions to capture the minutiae of Em’s day-to-day existence as a distant but attentive observer. Mundane tasks like making coffee, packing a suitcase, and showering play out in more or less real time, all of it given weight as part of the process of preparation for work.

In addition to these highly observational sequences, we are given access to Em’s interiority through bodiless voiceovers or direct testimony. Lounging on a bed in her underwear with visible track marks dotting her arms, she speaks into a laptop webcam to an unidentified someone about her history between cities, clients, and states of dependency.

“I was always a version of myself when I was escorting. I was me, but without all the ugly parts,” she says. “Playing up what they wanted to hear, but keeping it real at the same time.”

It’s a remarkable monologue that reveals the dual nature of Em’s work as an escort and as a documentary subject/co-author, but also speaks to the multiple tensions between fiction/reality and observation/performance at play within Rovinelli’s film and documentary practice as a whole. Which Em are we seeing? Can performance and reality be separated? Does it matter?

The most incredible convergence of these questions and ideas comes through the eight-minute sex scene within the first half of the film. Preceded by the recitation of Shakespeare’s sonnets by Em’s john, then accompanied by a seemingly incongruous electro-pop soundtrack, the very artificial set up transforms into something like a very “real” moment as the two bodies start to engage with each other. But is it? Before we can take that idea all the way, Rovinelli cuts and moves on.

Despite its extremely rigorous formal approach and its overall pessimism about surviving the dire socioeconomic reality of the U.S., Rovinelli’s film is full of tenderness and, yes, empathy for its subject, which elevates it and keeps it emotionally engaging. This is perhaps most strongly felt in the film’s final scene, when the suggestion of happiness despite all, even for the briefest of moments, feels sublime.