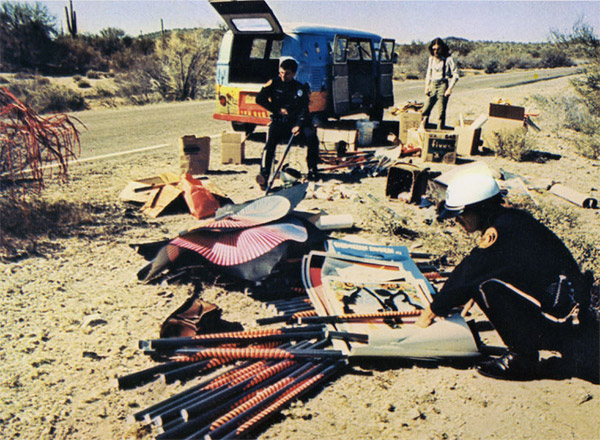 James William Guercio’s only film is an ode to the Great American Male starring Robert Blake as John Wintergreen, a short-statured (expect sight gags) Arizona motorcycle cop whose dream is to become a homicide detective and have “four wheels under him instead of two.” Wintergreen never lets speeders off the hook and reads books like “Contemporary Sexual Behavior and Its Impact on Urban and Rural Crime” in his spare time. He scours the empty desert valleys obsessively because, “somebody’s gotta be doing something bad somewhere.”

Because Wintergreen is a pain in the ass, he has only one friend on the force, a simpler man named Zipper (Billy Green Bush) who spends his days reading comic books by the side of the road and making observations like, “Look at this meat and potatoes…Wonder Woman is really built.” Zipper loves his motorcycle-based life and his dreams are all made out of chrome.

Wintergreen gets his chance to prove himself when a local hermit is murdered and he becomes the driver for a big shot detective in a ten gallon hat named Harve Poole (Mitchell Ryan). Harve is an impotent racist who believes that “a precisely orchestrated conspiracy of police genocide” is unfolding in America. He may be a swaggering fake, but Wintergreen starts to learn about what it takes to be a “big man” on the force.

Electra Glide in Blue is full of artful sorrow and a nagging nostalgia for the mythic and straightforward moral code of the West, and Wintergreen sure is an American, cracking raw eggs into a glass while lifting weights in front of an American flag and a painting of Daniel Boone. The 60s loom large like a wound on the body politic: police use an Easy Rider poster for target practice and there’s a scene referencing Altamont where nothing goes horribly wrong. Wintergreen hates it when his fellow cops beat up hippies, but ultimately, hippies are lost people who lead dark lives. We’re meant to learn that Zipper’s conception of justice was right all along: “We all get what’s coming to us.” Slow fades to sepia and black & white express the fossilization of a world made up of Wintergreens: well-meaning American men of the rank-and-file, giving the world the kind of law and order it deserves.