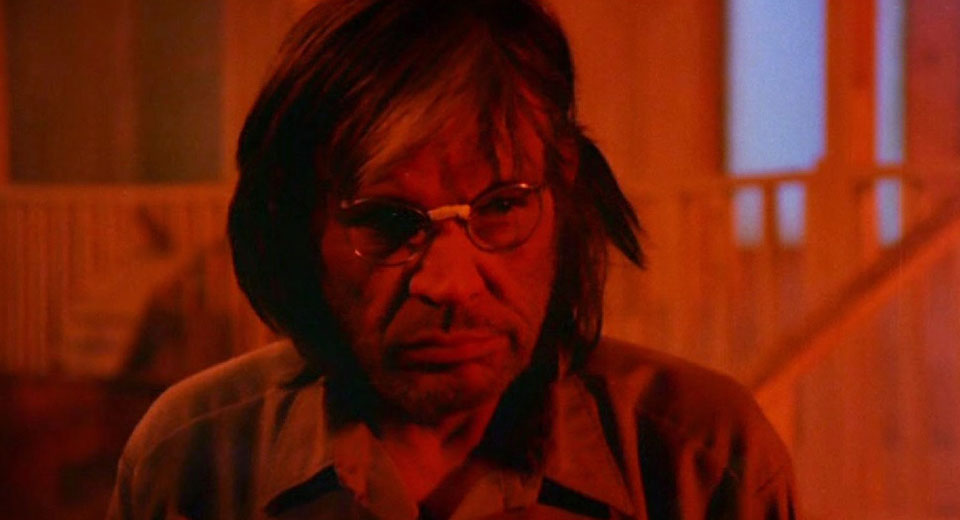 Imagine a collaboration between Tennessee Williams and Herschell Gordon Lewis, and one might begin to develop a sense of Tobe Hooper’s multifariously sticky Eaten Alive.  The overshadowed follow-up to The Texas Chainsaw Massacre, likewise co-scripted by Hooper and Kim Henkel, eschews its predecessor’s wry, faux-documentary veracity for a stagebound artifice that suggests Dario Argento working with the garish palette of Color Me Blood Red. Like Chainsaw, it has roots in true crime: in this case, the legends surrounding Texas serial killer Joe Ball, the proprietor of a saloon and alligator pond who some believe fed as many as twenty victims to his pet reptiles. Hooper and Henkel’s fictional proxy, Judd (prolific TV western actor Neville Brand), owns a fleabag motel that serves as virtually the sole setting of Eaten Alive’s twilit hermetic universe. He’s visited by a string of showgirls, sheriffs, troublemakers, and wayward travelers, including Mel Ferrer, Chainsaw’s Marilyn Burns, exploitation stalwart Roberta Collins, and a pre-Elm Street Robert Englund, all potential victims in this dimestore Psycho with teeth.

Brand ably carries the show as one of Hooper’s quintessential psychopaths: a depraved, neurotic, and prurient—yet compellingly vulnerable—American degenerate. Within Hooper’s filmography, Judd’s darkly comic portrayal acts as sort of a bridge between the menacing patriarch of the original Chainsaw and its sequel’s cartoonishly grotesque Vietnam vet Chop Top. If the comedy of Chainsaw isn’t immediately apparent, Eaten Alive is more eager to tip its hand as a truly twisted satire whose takeaway might be phrased as homo homini gatorus: man is bloodthirsty killer gator to man.

Drafthouse’s Hooper retrospective—organized before the director’s late-August passing—continues through the weekend with 35mm prints of The Funhouse (also written up on Screen Slate by Chris Shields), Invaders from Mars , Lifeforce , The Texas Chainsaw Massacre 2, my personal favorite, which screens as a double feature with a 4K DCP of the original.