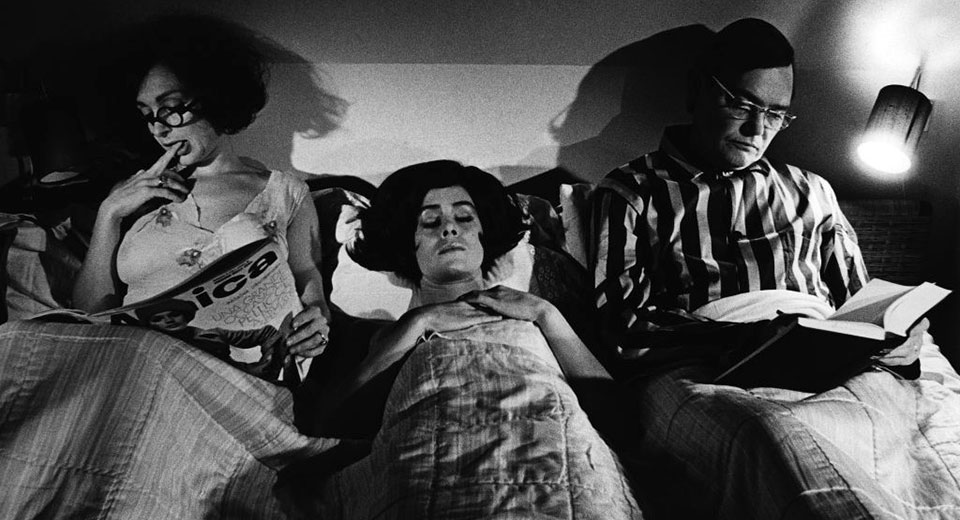 Just when you thought you’d seen it all, Metrograph presents a new restoration of Susan Sontag’s 1969 debut feature Duet for Cannibals —a film that defies expectations and understanding, likely to the chagrin of many who will wander into the cinema tonight merely looking to relax and have a good time. Duet is not that kind of film. Sontag asks her viewers to endure and thereby enjoy the recapitulation of an abusive relationship ad nauseam, presenting a stark and hostile world in which idealogues and their adherents mistreat their colleagues, their lovers, and themselves. Sontag pokes at this senselessness with a blunt instrument and gives new meaning to the word satire. If an absurdist cat-and-mouse game with conspiracist undertones sounds like a good time, then this movie is for you.

There are many takes that analyze Duet in relation to Sontag’s writings Against Interpretation (hey, the title says it all), and while it certainly helps to have a grasp on her philosophy, it’s by no means necessary to understand this film. On the surface, the film depicts an unemployed and idealistic young couple whose relationship disintegrates when they are hired by the wealthy, respectable, and painfully dysfunctional Bauer couple. A clever curator might program Duet alongside Bong Joon Ho’s recently released and much more accessible Parasite—also a film about gender, class, and co-dependence. But a closer examination of Duet offers insight into the process of a first-time-filmmaker putting theory into practice—add to that the complexity of adapting to a foreign language and culture (the film is in Swedish), and you will have some impression of the difficulty directors face when translating ideas about filmmaking into filmmaking itself.

Rather than analyze Duet as a work of fiction, one might instead appreciate it as an historical artifact, a record of its author and era, an avant-garde experiment that is by now bygone and bypassed by a new generation of critically-minded artists who have since refined the art of cinematic satire to a deadly sharp and invisible point. This isn’t a critique of Sontag’s filmmaking so much as an acknowledgement of the fact that she was right. What yesterday might have seemed incisive, provocative, or radical feels, today, a bit flat. Time goes on, tastes change, movies about the sexual and political conflicts between more or less privileged white het Marxist couples seem distant and quaint. My favorite Sontag quote bears repeating here: “Precisely by slicing out this moment and freezing it, all photographs testify to time's relentless melt.”