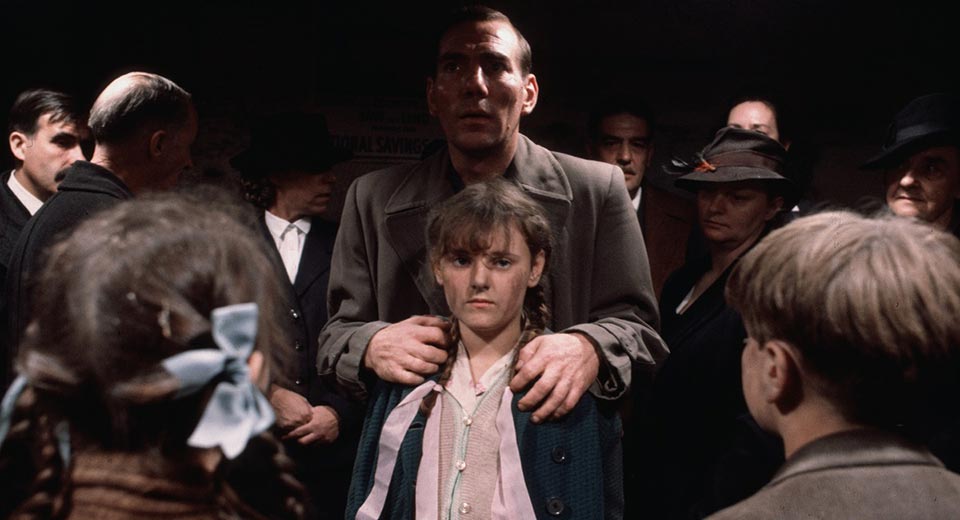 Distant Voices, Still Lives, the movie that established director Terence Davies's reputation as a feature filmmaker, is currently in the midst of a revival run at Metrograph. Davies uses tableaux, long takes, meticulous reframing, impressive tracking shots, and visual poetics to create a shattered family portrait, reassembled through the dark corridors of memory. Indeed, his film is both portrait and family album, where the blank spaces between the photographs are filled in by fleeting remembrances and song.

The film centers on a midcentury British family whose lives are dominated by the memories of a monstrous, abusive father. In the film's first half, titled "Distant Voices," we see the family's young children incur the wrath of their terrifying (and possibly mentally ill) father. Davies's fractured approach, where reminiscences mingle with visual lyricism, plants the seeds of trauma that will haunt the film's second half, "Still Lives." These two distinct halves are not predicated on a simplistic causality however, but instead create a diffuse web of thoughts, feelings, and snapshots, which result in a nuanced and powerful overall effect.

Drifting along with camerawork evoking Sacha Vierny at his most ghostly, the film is haunted by the melodies of popular music, tying this particular family's experience to the country and time at large. Music seems to also reflect Davies's focus on expression over dictation, where everything the viewer needs to know emotionally, can be heard in the pain and joy of the human voice. The final few images of the film are deeply moving, as the family's son, Tony, wordlessly weeps after his marriage, finally succumbing to the weight of his memories. In this moment, we see that the voices of the past still haunt him, but he, and we, still live.