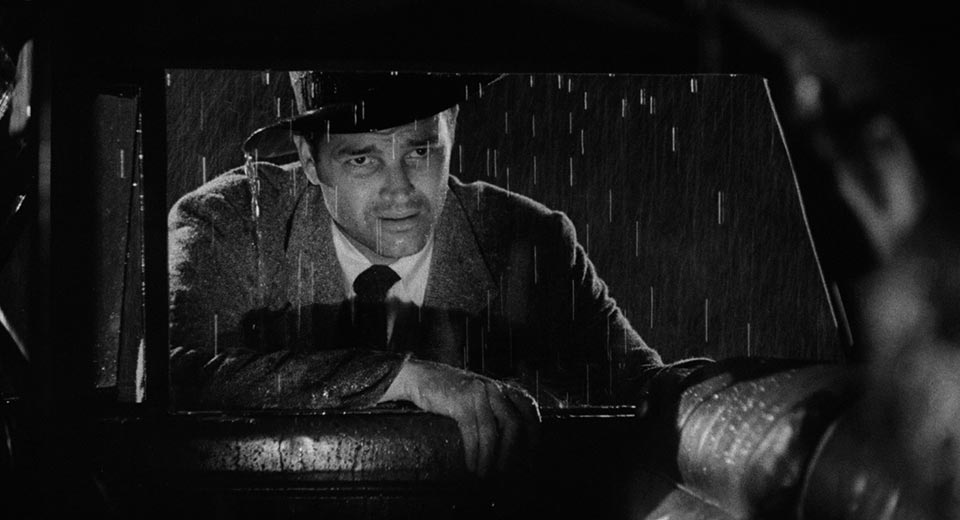 Editor's note: Detour is newly restored and currently in the middle of a revival run at Film Forum. Screen Slate board member Nellie Killian discusses the new restoration on the latest Film Comment Rep Report podcast, also including Screen Slate's Jon Dieringer, which you can listen to here.

Early in Edgar G. Ulmer’s stylish, low-budget noir Detour, Al Roberts (Tom Neal) brushes off a chatty truck driver at a roadside diner with “My mother told me never to talk to strangers.” If only he’d listened to his mother.

As Roberts tells it, “Fate, or some mysterious force, can put the finger on you or me, for no good reason at all.” That’s how someone like him, a virtuoso jazz pianist with a pretty fiancé and his whole life ahead of him, can end up far from home, where he keeps accidentally killing people. He’s blackmailed by the ferocious Vera (Ann Savage) a femme fatale by way of the bayou who’s had to claw her way out, literally and figuratively. Forget those glamorous, treacherous beauties who betray the faintest hint of cunning – Vera is a quick-thinking, fast-talking survivalist who tells it like it is and drinks and smokes like a man, despite her nasty cough (TB serving as a useful signifier for someone recently emerged from the gutter and probably heading back there soon). Roberts’ first impression of her is that, “she looked like she’d just been thrown off the crummiest freight train in the world.” She’s unwholesome too, possessing neither “the beauty of a movie actress, or the beauty you dream about when you’re with your wife.”

Vera declares her dime store philosophy: “Life’s like a ball game. You gotta take a swing at whatever comes along before you wake up and find out it’s the ninth inning.” She blackmails Roberts not out of malice, but because she knows a good thing when she sees it.

Even though Vera is a vicious adversary, it’s difficult to muster too much sympathy for the hapless Roberts. It’s as if Tom Neal was born to play a worried man who’s in a lot of trouble – his face was made for it. In fact, when he flashes back to happier times, we hardly recognize him, and even when he smiles his eyebrows seem to point the wrong way. Perhaps there’s an explanation in his tumultuous offscreen life, which culminated in him killing his third wife Gale Bennett by shooting her in the back of the head. He maintained that it was an accident, so it seems that “fate, or some mysterious force” really did put the finger on him.