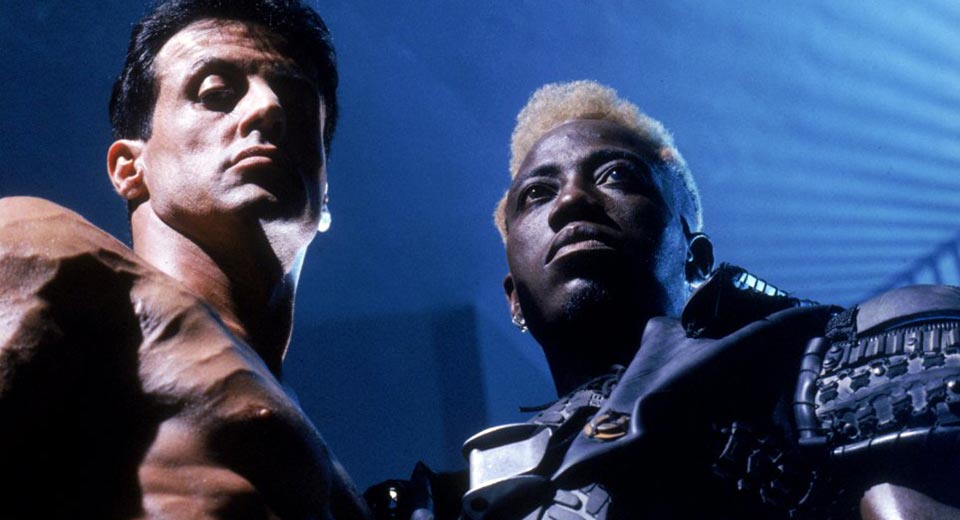 Bringing up the rear of BAMCinematek’s Wesley Snipes retrospective is the prophetic multi-hyphenate action-sci-fi-dark comedy Demolition Man , directed by Marco Brambilla, from a script by Heathers co-writer Daniel Waters. Snipes plays crime lord Simon Phoenix as every suburbanite’s living nightmare: a life-long “street kid” who has aged into a man devoid of empathy, armed with incredible strength, and oozing charisma. Phoenix rules near-apocalyptic Los Angeles with acts of domestic terrorism, carried out by a rogue’s gallery of similar sorts. Just to give you an idea: buses, if they’re running at all, are a favorite bartering chip of these no-goodniks.

With the city under siege, the rule of law has been abandoned by all but one man: LAPD Sergeant John Spartan, played by Sylvester Stallone. Supercop finds apex adversary in “superpredator,” and vice versa. But when Spartan finally makes his 12-point collar, we catch a glimpse of the shape of things to come. The court system, mysteriously all-powerful amid the apparent chaos, sentences Phoenix to a kind of living death penalty in the form of cryogenic stasis.

In the ensuing decades, while public enemy number one languishes in cold storage, Los Angeles undergoes a baptism by earthquake (if only) and emerges anew as “San Angeles,” a megapolis stretching from Santa Barbara to the Mexico border. This once-smouldering cesspool has blossomed into the safest space imaginable: a human terrarium, composed of sleek, brutal façades, perfectly-manicured green spaces, and self-driving cars. Generations of overzealous punishment for “quality of life crimes”—swearing, watching violent films—have ushered forth a new era of peace and prosperity, and every restaurant is a Taco Bell.

Then Phoenix comes up for parole, breaks out of prison, and things get interesting again. San Angelinos, many too young to recall the “bad old days,” fall before the conquering villain just like old times. Phoenix wreaks havoc upon the affluent, mildly fascist city state, giving a hotfoot to the jackboot of “law and order.”

Snipes is a perfect foil for Stallone’s cop shtick, with plenty of combat training and comedic timing to go toe-to-toe with Blockbuster royalty. One could be forgiven for dropping the storyline of the film’s actual protagonist, Sergeant Spartan, and his perpetual “gun-shooting face.” Win or lose, the ensuing cat-and-mouse chases and boss-level blow-outs belong to Phoenix, bad guy be damned. His sinister admixture of levity, curiosity, and hair-trigger mania secure Demolition Man a place among the greatest works of satire put to screen.