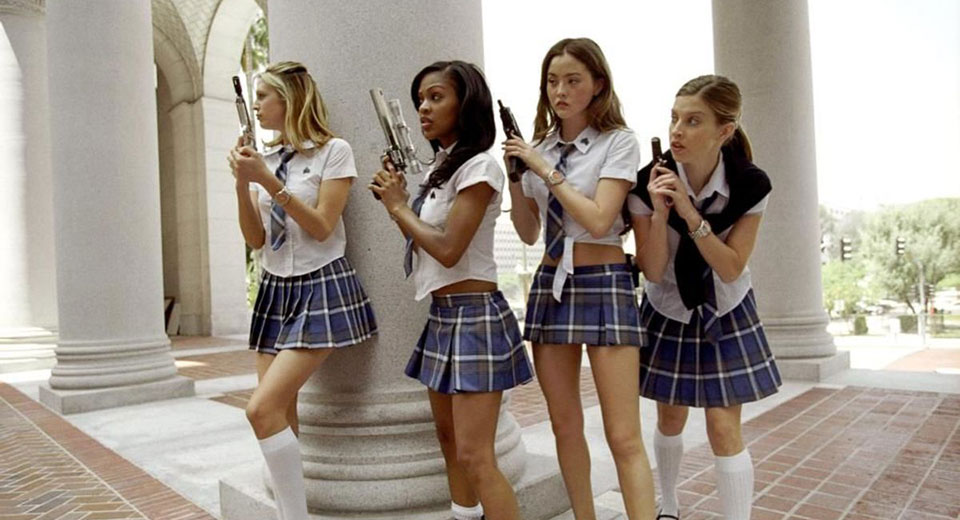 Though I gave my cultural memory of the year 2004 a thorough scouring, I could not for the life of me remember any particular reason why popular films from that year featured a heft of SAT-related plot devices. A long-forgotten celebrity cheating scandal perhaps? Angela Robinson’s D.E.B.S., shielded in its protective coat of unimpeachable kitschy irony, has fared far better in comparison to the MTV Films heyday teen heist thriller The Perfect Score, in which Scarlett Johanson plots to steal the answers to the dreaded exam. In D.E.B.S., the standardized test is but a ruse for a hidden rubric upon which “the government,” as proxied here by Holland Taylor and the late Michael Clarke Duncan, grades teenagers’ ability to deceive; sussing out which of them will make prime candidates for a spy school where the trainees dress in ties and checkered skirts and are given an array of comically sized, exorbitant weapons that the young cast heave around as if they were lighter than air.

D.E.B.S.’s budget-friendliness extends far beyond its props. Shot on early HD video, the movie possesses an ungodly sheen that renders everything on screen artificial looking, not least the sets that appear gaping, devoid of extras. Michael Clarke Duncan materializes awkwardly to give orders in a cloud of digital pixie dust. There is no accounting for continuity. This is all fine and purely beside the point. Robinson may have achieved dramatic gravitas with 2017’s Professor Marston and the Wonder Woman, but anyone who isn’t at least curious about an alternate filmography in which Robinson was continually allowed to make films like this and her early short Chickula: Teenage Vampire (1994) with increasingly sized budgets are the sort of sobersides who oft-wonder “what is camp?” when it’s right here, slapping you in the face with a wacky, out-of-sync sound effect.

In a plot with startling resemblance to Killing Eve, head blonde D.E.B. Sara Foster falls hard for master criminal Lucy Diamond (Jordana Brewster), on whom she is penning her dissertation, which paints the killer as trying to fill an emotional void left by her absentee father. Diamond, taken by the pupil’s research, informs her that she is actually just a lesbian, and asks her out. Diamond’s criminal enterprise seems to consist solely of robbing the occasional bank and daydreaming about “sinking Australia” because its populace “has a bad attitude.”

D.E.B.S.’s best joke is probably the fact that the acronym in its title is neither mentioned or explained, though it is slavishly stylized as such throughout the film. It comes as no surprise that queer icon Andrea Sperling produced; her other credits include the best and silliest of Gregg Araki and But I’m a Cheerleader (1999), and this films straddles the aesthetic common ground between the aforementioned exactly. As with the majority of the most eminently watchable films of that period, sometimes it is best not to ask “how good,” but rather “how gay.”