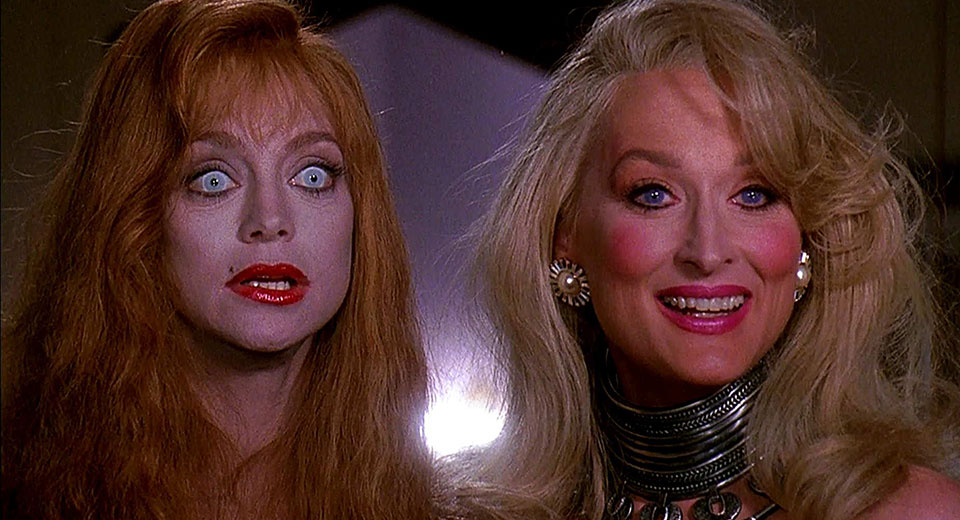 In Robert Zemeckis’s Death Becomes Her, two women just entering approximate mid-life vie for the affections of a nebbishy plastic surgeon-cum-mortician while struggling with a beauty standard that accepts not a wrinkle less than perfection. The miraculous appearance of a mysterious woman with a magical potion promising instant and everlasting youth provides the answer to all of their sunspot and vein-related problems—were it not for the accompanying murders which render their beautiful, immortal flesh the ghoulish quality of the less-fortunately undead. It’s the sort of not-particularly-enlightened fare that, rated PG-13 and opening at the top of the box office (over Buffy the Vampire Slayer, no less), became a much-loved and frequently rented title for a certain subset of video store denizens of the early 90s.

But Death Becomes Her is so much more. Legends Goldie Hawn and Meryl Streep deliver unsurprisingly fantastic, wiggy performances that pay loving homage to peak-eyebrow Joan Crawford, opposite a truly enjoyable comedic turn from Bruce Willis. Then there's Meryl's scrunchies and pantsuits; the all-white, lingerie-uniformed basement spa; a paparazzi-covered, red-carpeted book launch with live music and evening gowns; floating nuns; and goddess Isabella Rossellini, always mostly naked, with a prescient manicure and several long-haired henchmen, one of whom is played by Fabio. There's even a sequence in which Goldie Hawn wears a fat suit and is dragged to a mental institution while eating ice cream with her fingers. All this is interspersed with Oscar-winning early CGI, much of which screams non-prestige television to today's trained eye. The film is wholly of its era, a delightful trip down VHS-memory-lane and, frankly, a masterpiece.

The year 1992 is much-beloved for cinephiles of a particular ilk for era-defining films such as Silence of the Lambs, Thelma and Louise, JFK, Cape Fear, and, perhaps less celebrated but just as definitive, Death Becomes Her. Today's young Zemeckians aren't guaranteed to have seen it, sandwiched as it is between the conclusion of the Back to the Future trilogy and Forrest Gump. But do you deserve Zemeckis at Marwen if you haven't loved him at Death Becomes Her? Tonight it screens as part of IFC Center's “Queer|Art|Film” series, with an introduction by Raja Feather Kelly.