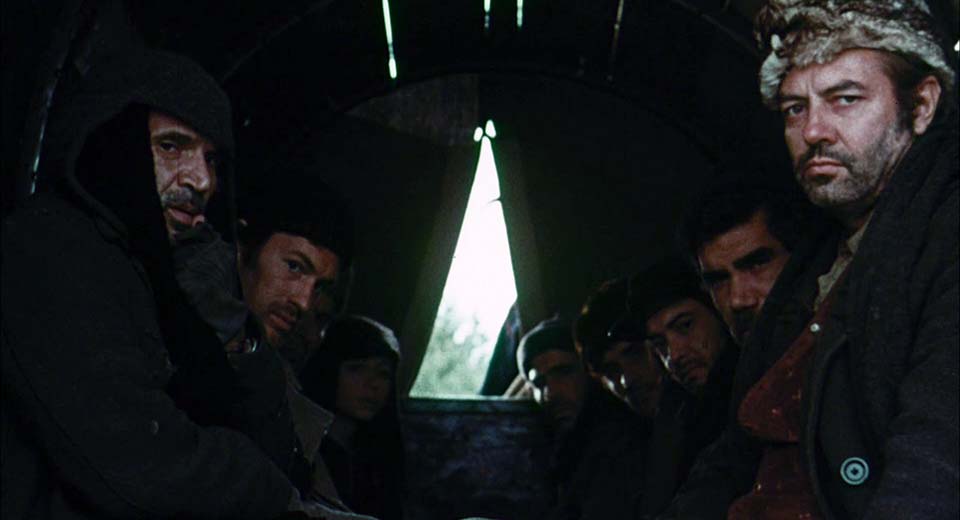 If you’re looking for heroism in your frontier fiction, you will not find it in Cut-Throats Nine;  the tense and nihilistic Eurowesten has nary a shred of righteousness. However, while Joaquín Luis Romero Marchent’s (Gunfight at High Noon) blood-soaked spaghetti has garnered some new fans these past few years because of its conspicuous influence on The Hateful Eight, there is much more to be found here than fodder for Tarantino “homage” Easter eggs.

Sgt. Brown (Robert Hundar) and his daughter (played by Emma Cohen of Horror Rises from the Tomb) are chaperoning a wagon full of chain-gang convicts (one of whom is supposedly responsible for murdering the sergeant’s wife) when it is raided by bandits searching for gold they anticipated finding inside. When they don’t turn up anything they destroy the wagon and kill most of those in the group. The sergeant, his daughter, and the seven remaining killers continue on foot until the discovery that the gold is actually in their own chains stokes the already-fiery tempers of the murderous men. Ferocious violence ensues and the tables turn again and again, all amidst the gorgeous snowy backdrop of the Pyrenees mountains.

The practical FX and vicious gore (limb hacking, eye-gouging, and disemboweling abound) have contributed to the film’s reputation as particularly “brutal,” as the already sadistic characters are underlined by their committing acts of on-screen violence not seen in westerns at the time. However, the more alluring natural imagery and hallucinatory flashbacks situate it more in a Lucio Fulci (although it predates his best films) context rather than a purely exploitative one.

Cut-Throats Nine tears up Spectacle Theater tonight as part of their international western series, Blood in the Dust. The beautiful restoration by Hypercube Media is not-to-be-missed.