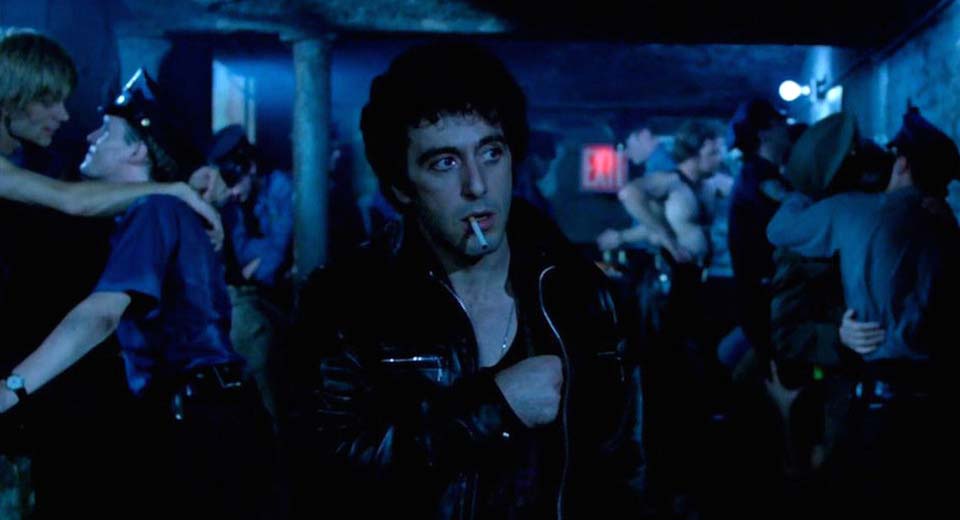 If a leather-clad serial killer—with a penchant for knife play and hog-tying—were stalking a scene filled with leather-clad men (who also enjoy knife play and hog-tying!) how would you even begin to catch him? For NYPD homicide detective Steve Burns, played (mostly) subtly by the ever-colorful Al Pacino, the only way to catch a master criminal is to meet him at his level. And so, donning a leather cuff and too-tight Levi’s 501s, Pacino-as-Burns makes his descent into the “edgiest” realm of New York’s gay underworld and begins Cruising for trouble.

From jump, director William Friedkin’s American giallo spread rage and repulsion up and down the Kinsey scale, receiving boycotts from gay activist groups and uber-right wingers alike. Casting extras from New York’s real-life, bygone leather bars is a handsome detail, offering one a taste of the erstwhile Meatpacking District, and the danger that came with back-alley liaising after a night at the Anvil. These aren’t your old-fashioned, cuddly, network television queens, mind you, but “real” tough guys built like linebackers (with cuter accessories). The startling ensembles and props on display may seem campy now, but consider how frightening a handlebar mustache and spiked dog collar used to be, before our halcyon age of Tom of Finland pot-holders and “zaddy” captions on Instagram.

Within star Pacino’s own filmography, Cruising remains a bit of an outlier. His Detective Burns is vulnerable, but curious, and one wonders if seeing Michael Corleone bumping-and-grinding in a crowd of rough trade was too much for most meathead moviegoers. Burns’ infiltration of this leather menagerie (otters and wolves and bears, oh my!) was unimaginable to audiences in 1980, and probably did more than little to dissuade tourists from visiting our fair city. It was a risky move for Pacino, too, but when has the Maestro ever shied away from the hard-to-handle and tough-to-bear? Although its initial release was fraught with violent protest, Cruising has aged wonderfully – as a film about repression and sexuality, a rain-slicked nail-biter, a document of a now-lost subculture and, for a few us, as a vehicle for Pacino’s finest turn on the dance floor since Connie Corleone’s wedding.