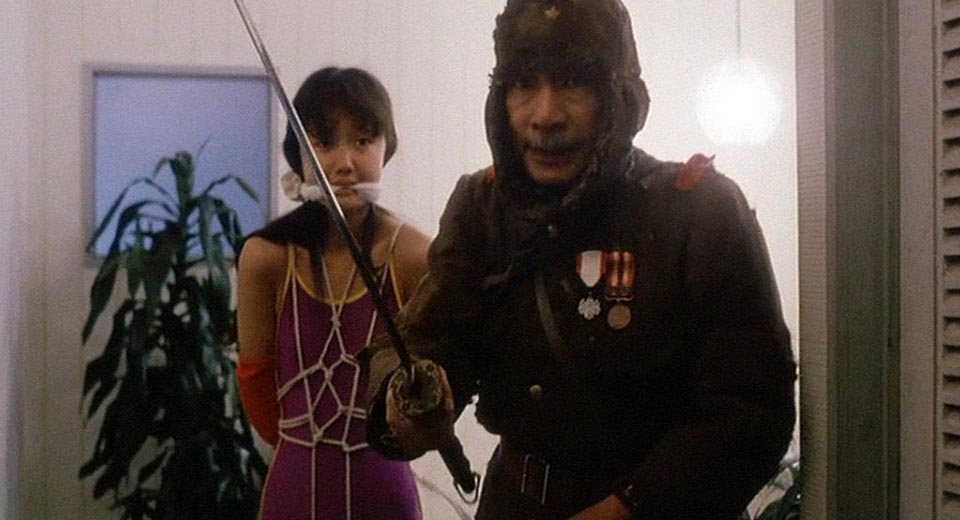 Punk auteur Gakuryu (formerly Sogo) Ishii takes on that most prestigious of genres, the Japanese family drama (popularized by directors like Yasujiro Ozu and Mikio Naruse), and turns it on its nose in 1984's The Crazy Family. Katsuya Kobayashistars as the family's patriarch Katsuhiko, who has finally come up enough in the world to purchase his family a house in the suburbs, to get away from what he calls "civilization sickness" - an "illness" viewers may also recognize from Todd Haynes' Safe. But where Haynes's film is a sober look at the pressures of postmodern society, Ishii's is a funhouse mirror version where the family's obsession with status and celebrity drive them to disaster.

Katsuhiko's oversexed wife Masaki performs a (relatively chaste) striptease for the old men in her croquet club; his daughter Erika is obsessed with celebrity - She wants to be a singer! No, an actor! No, a professional wrestler! - and speaks about herself in the third person; his son Masaki is studying so hard for university entrance exams that he stabs himself in the leg to stay awake; and his father has PTSD from World War II. And Katsuhiko himself is so obsessed with "white ants," tiny creatures he is afraid will destroy his home, and his family that he turns his house into an excavation site.

If it sounds horrifying, it is a horror movie in a certain light; The Crazy Family explores the depths of upper-middle-class depravity, but understands the ridiculousness inherent in that horror. The film fits right in alongside 80s class-conscious shitshows like Society, The 'Burbs, and the work of Paul Bartel. At Spectacle, The Crazy Family screens alongside Ishii's thriller Labyrinth of Dreams, dreamy teenage mystery August in the Water, and brain-bending detective film Angel Dust throughout the month.