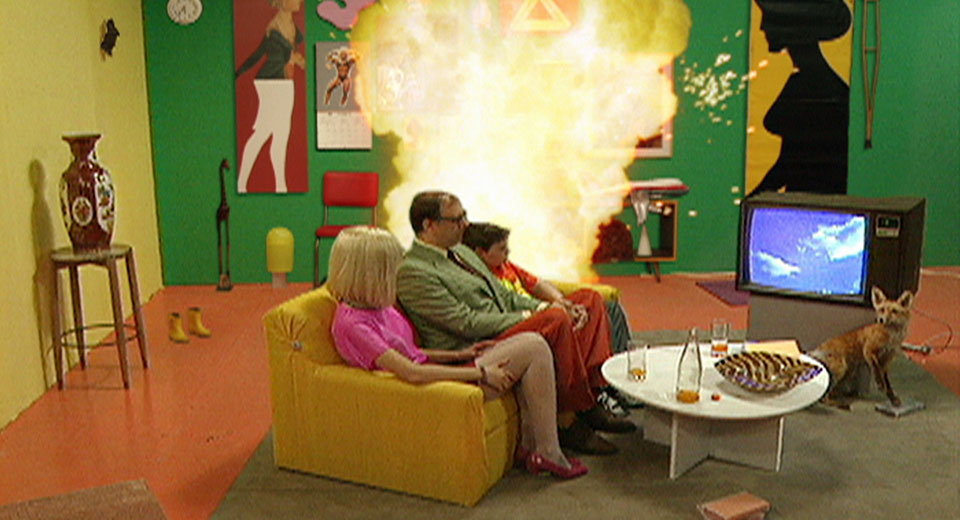 Michael Snow’s 2002 digital film *Corpus Callosum is a whole lot of movie. First, it holds the, some might say, rare distinction of being a successful, continuously engaging feature-length experimental film. Second, and this might have a significant bearing on the first point, it engages in cinematic trickery while also laying its artifice bare for the audience to see (or rather hear, as Snow’s direction is heard on the soundtrack). Third, *Corpus Callosum, as the name might hint at, gives a visual-metaphoric life on screen to our minds, and more specifically, to the pulsing ballet of neural blasts in our brains which both interpret and create our realities.

Snow’s film uses a tracking shot of an average looking office and constructs a seemingly endless space with it. The effect resembles the horizontally oriented work of Zbig Rybczynski and early trick films which used clever cutting to produce the impossible. Building on top of this backbone of illusory space, both specific and general—specific in its photographic reality and general in its cut and paste repetition—*Corpus Callosum bends and shapes objects, space and people with the speed and weightless freedom of thought. Like thoughts however, images and ideas repeat and the action of the film circles back around the same interior spaces which are both seemingly nothing and everything, spaces which are in constant flux at the whim of the brain’s perpetual “movement.” The living room in the film recalls a Devo-like vision of the nuclear family, but its melting transformations and disappearing and reappearing objects point to something more than a cultural critique. The room we see is the idea of “room” populated by objects which are symbols of objects. In *Corpus Callosum Snow uses the moving image medium to recreate a metaphorical vision of thought in action (in all its tangential, violent, funny and disturbing glory) and ultimately illustrates the mirror cinema can be for our minds. This potential as mirror is something inherent in its very nature as both mechanical and phantasmagorical art—in this instance moving past romantic narrative and normative psychic and emotional illusions---and instead using cinematic illusions to reflect our brain’s mechanical realities.

Beyond this Snow’s film, or at least his own interpretation of it, is about emerging virtual space and its mind and reality altering potentials. The film is filled with computer screens and more than once the camera zooms into one of these screens ostensibly entering into another layer of reality (a la Lynch’s worlds within worlds) or into a new reality all together. Rather than making a distinction between new digital worlds and traditional cinematic spaces, *Corpus Callosum seems to draw out their affinities, the film existing at crossroads of both mediums—the material nexus of thought, imagination, passivity, will, desire and dread.