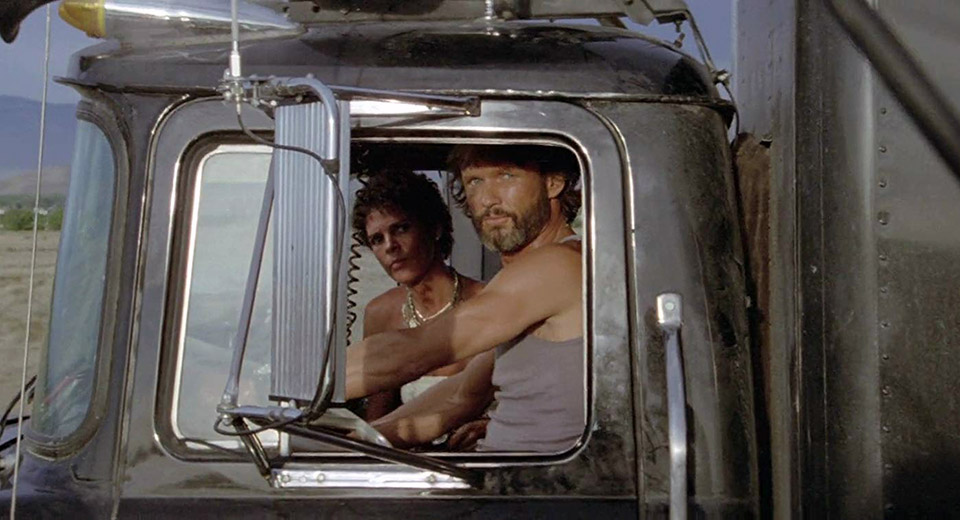 In these ugly times, socialists, anarchists, and libertarians will all take what they will from Convoy (1978), Sam Peckinpah's penultimate film, with each group snugly wedged in conviction that the film shares their sympathies and grievances. Peckinpah's personal ideology of fraternal individualism is here personified by Kris Kristofferson's Rubber Duck, a quiet man who nonetheless leads dozens of truck drivers in an ostensibly leaderless revolution across state lines. At various moments Duck heads a commune, crusades for racial justice, beats up the police and slams the accelerator toward a hail of bullets. He's the quintessential Peckinpanian Untenable Man, a middle-aged white American with no place in a mad society and yearns to be left alone yet can't turn down an opportunity to make a dramatic stand against the politically and morally corrupt. The film is downright utopian in its belief that an undefined coalition of upstanding workers can act as a counterweight to abusive authorities, but since the film's release, any semblance of camaraderie among working people has been systematically degraded by the ruling class, making Convoy one of the most politically relevant films on screen in 2019.

Sheriff "Dirty Lyle" Wallace (Ernest Borgnine) pads his coffers with trumped-up ticket fees at the expense of Duck and his highway colleagues, an impressively diverse set featuring all ages and two prominent African American characters, one of whom is female. After Wallace takes his badgering too far with father-to-be Spider Mike (Franklyn Ajaye) a Trucker Vs. Cop melee breaks out in a roadside diner. Peckinpah awkwardly deploys his trademark slo-mo violence as the cops and truckers send each other crashing through pool tables, but the effect doesn't ennoble a bar fight the way it turns shootouts into Homeric tragedy. Temporarily victorious, the truckers make for the state border, coalescing behind Duck, who just aims to keep going. They find that the truly reluctant leader is the easiest to trust. The staties next door are no less keen to see cop abuse go unpunished, and the chase swells until the feds and the media get involved.

Rare for any filmmaker, Sam Peckinpah's most commercially successful film is also one of his best. The film gets incredible mileage from dynamic images of trucks lumbering across Arizona's white deserts. A particularly gorgeous sequence poetically dissolves from one truck to another as the sun sets and headlights emerge as beacons in the dark. Convoy lacks the red spatter for which "Bloody Sam" was known, but it successfully captures a cathartic spirit of sacrifice every bit as visceral as his most famous onscreen massacres.