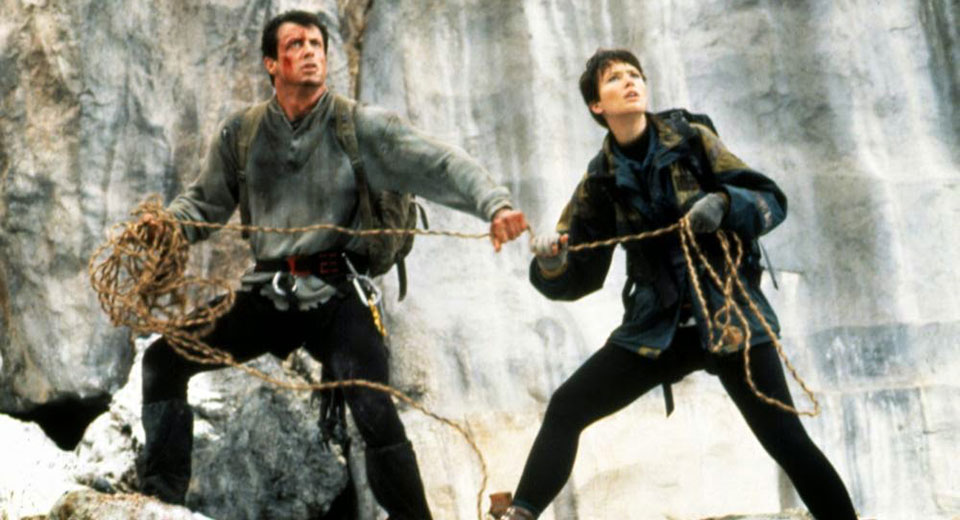 Cliffhanger is, ironically, not a cliffhanger. The plot couldn't wrap up more neatly: the hero gets the girl, the bad guys die, and all interpersonal tensions are resolved. But you don't watch a movie like Cliffhanger for its unconventional narrative structure or challenging philosophical positions. You watch it the way you listen to a recording of Mozart's Requiem in D minor: for subtle variations in mood and intensity that make each version unique while leaving the major themes intact.

Director Renny Harlin is a countryman of mine. Finland, with a population three quarters that of New York City, was not a nurturing environment for aspiring directors of high-octane action blockbusters in the 1980s, so young Harlin went rogue and independently raised the funds for his debut feature, the rabidly Reaganite Cold War shoot-em-up Born American (1985). (He couldn't afford Chuck Norris and cast his son, Mike Norris, instead.) Banned by the Finnish censors for its potentially harmful effect on Finnish-Soviet relations, Born American provided the blueprint for Harlin's career. It was all there: his politics, his cinematic preoccupations, and his ambivalent relationship with his homeland.

After relocating to Hollywood and making hundreds of cold calls to studios and producers, Harlin scored hits with Nightmare on Elm Street 4 (1988) and Die Hard 2(1990). Then, in 1993, he got the opportunity to tackle a theme close to his heart: using the natural environment to defeat a superiorly armed foe. The essence of the mythos surrounding Finland's Winter War against the Soviet Union in 1939-1940 is that its troops were able to outsmart and outlast the mighty Soviet military machine using nothing but their legendary ingenuity. Substitute Sylvester Stallone, Michael Rooker, and Janine Turner for the Finns and John Lithgow's gang for the Russians and you've got Cliffhanger.

Harlin almost got David Bowie for the part of Eric Qualen, but Lithgow was a blessing in disguise. He's iconic as Qualen, a perfect blend of smarmy intellectual and unhinged sociopath. He's "former military intelligence who found it more profitable going to the other side." But what's the "other side" in 1993? The Russians were no longer available as a default villain, so Qualen's gang is a vaguely defined cosmopolitan confederation with British or hard-to-place Mid-Atlantic accents. Is it because the Maastrich Treaty had just established the European Union, making its international governing class, the "Brussels elite," a new contender for global hegemony?

Cliffhanger is streaming on Prime and Hulu (Dec. 2020)