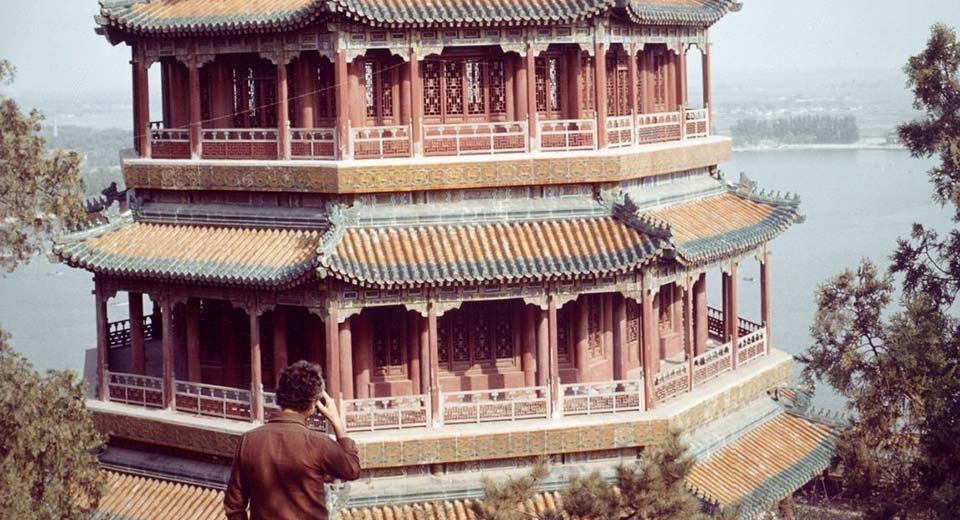 Between filming Zabriskie Point and The Passenger, Michelangelo Antonioni was offered the rare opportunity to make a documentary film in China. Why a chronicler of middle and upper-class ennui—whose most recent film had been shrugged at by critics and had flopped at the box-office—was chosen as the right conduit to show post-Cultural Revolution China to the world remains a mystery. Regardless, in May of 1972 the world famous director and his crew arrived in Beijing, where they were greeted by minders from the Communist Party of China, and handed their itinerary: 22 days of sightseeing, including visits to ancient monuments, various Party accomplishments, and an acrobatics show.

With little control over where they could go and what they could film, Antonioni and his crew produced Chung Kuo—Cina —a record of what fascinated them within the parameters of what they were allowed to see. Brightly painted billboards and posters depicting Red Guards on the march, and the faces of young women are all noticeable obsessions; as is the spectacle of school children marching in formation, performing complex routines in the style of Revolutionary opera, or staging relay races under the fatherly eye of a full-color portrait of Mao.

The film’s narrator—from what we imagine is a comfy chair somewhere in Rome or Milan—supplements the images with basic facts and his free associations on what the images mean. The unblinking stares of the crowds that gather to get their first glimpse of foreigners prompts the eventual realization “...that it’s us who are peculiar and foreign.” While a visit to the Great Wall inspires the recitation of a few lines by Brecht:

Who built Thebes of the seven gates?
In the books you find the names of kings.
Did the kings haul up the lumps of rocks?

The film’s political analysis stops there, with a question mark. As a documentary, there is nothing revelatory or decisively partisan about the film. But as a document of Antonioni’s compromised trip it is often beautiful, politically ambiguous and surprisingly modest. When asked about the contradictory politics in his movies, Antonioni maintained that all he could do was react honestly to each day of shooting. What he found each day in China was curiosity on both sides of the camera.