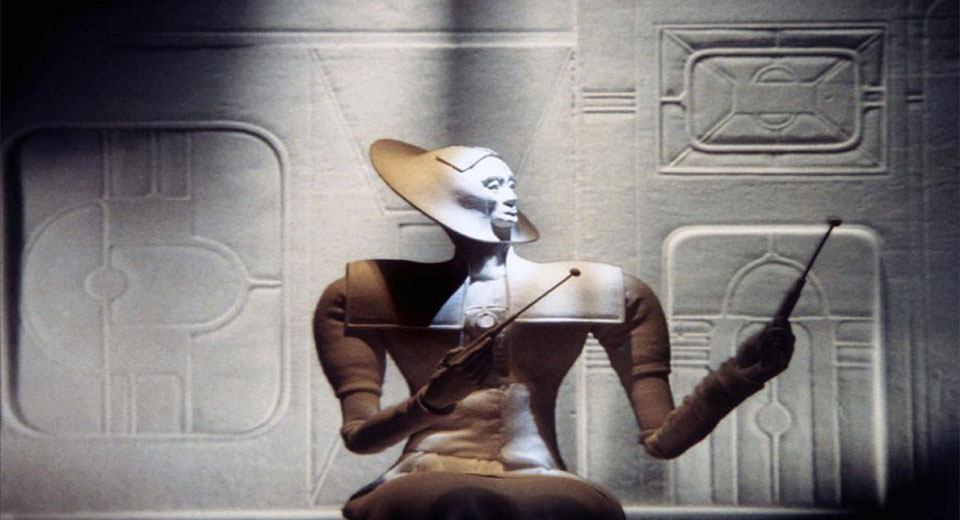 If you’ve ever wondered what the beings behind Clarke and Kubrick’s monolith did in their spare time, the answer may be found in Chronopolis (1982) an ecstatic work of cosmic stop-motion animation courtesy of prolific Polish animator Piotr Kamler. Five years in the making, Kamler’s sole feature wordlessly offers a surreal theology that could credibly serve as a prequel to 2001. In Kamler’s wonderfully circular project, he fashions then animates a pantheon of higher beings who in turn fashion lesser beings, who in turn overtake their creators.

Kamler presents a Mt. Olympus of tan edifices blending Futurism and Art Deco, presided over by a vaguely Egyptian set of immortals. They busy themselves with mysterious contraptions of spinning geometric forms while a group of humanoids struggle up a steep cliff to meet them. The timeless quality is aided by a psychedelic-renaissance-fair score by experimental composer Luc Ferrari whose electronic tones feel simultaneously past and future. Science fiction has always risked buffoonery by engaging the paradox of envisioning an intelligence far superior to our own. Kamler’s vision is among the most credible, offering machinations and signs tantalizingly beyond our grasp, though just familiar enough to provoke speculation.

Contemporary audiences might see in the amusements of the gods a resemblance to experimental video games. Lacking the immersive qualities of a Disney production, Chronopolis presents a simplified environment, though extraordinary in its design and texture, similar to games involving deceptively simple physics problems along the lines of “how do you get this thing into this other thing?” Kamler focuses on the hands of his puppets as they use small rods with bulbs on the end of them to manipulate and reshape small objects, which they then send through the air to interact with mysterious machinery. Though he leaves no literal trace on his puppets, we sense Kamler’s hands governing their movements as the puppets control the spheres and creatures of their own design. Observing the bouncing balls and spheres navigate abstract terrains, gamers in the audience will no doubt feel a twinge in their own hands, an eagerness to direct the movement of the onscreen figures. Kamler draws out the question that unites gamers, film directors and extraterrestrial gods, along with the rest of intelligent life: how does one shoulder the burden of self-consciousness?