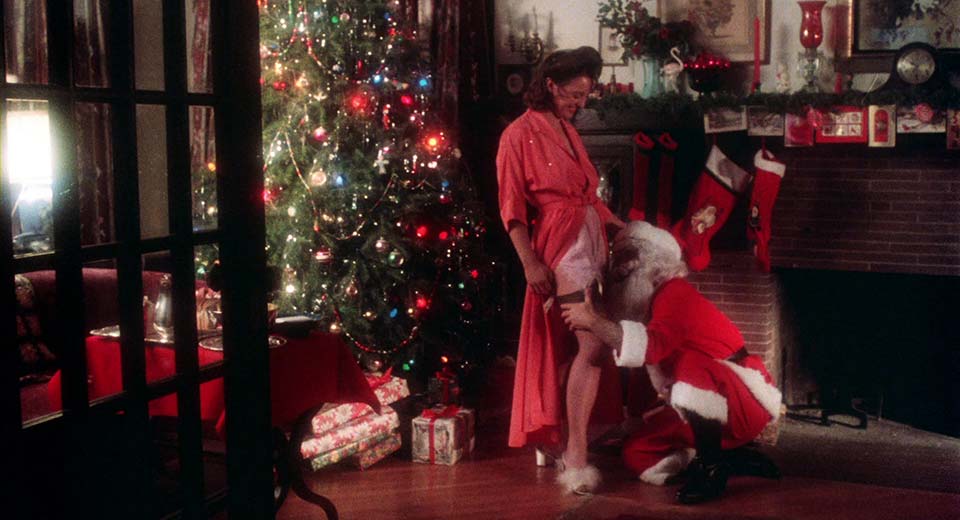 What makes a man start fires? The title of The Minutemen’s 1983 album ricocheted through my head while watching Christmas Evil, a movie that asks: what makes a man put on a Santa suit, paint a sleigh on the side of his cargo van, and drive around passing out stolen toys and murdering people? The moral perspective undergirding this investigation is surprisingly thoughtful in this otherwise resolutely seedy, unhinged exploitation gem from 1980.

Like most killer Santa movies, the ostensible motive is rooted in the childhood trauma of the primal scene—in this case, seeing Santa Claus kissing mommy underneath her Christmas robe. As an adult, Harry Stadling (Brandon Maggart—Fiona Apple's Dad) is an emotionally stunted if generally amiable toy factory assembly line worker who moonlights as a Yuletide vigilante voyeur, spying on the neighborhood children and keeping detailed, elegantly handwritten logs of who's naughty and nice. A confluence of factors leads Harry to snap—a colleague asks Harry to sub for him so he can spend holiday time with his family, only to go out boozing; a yuppie management type makes hollow promises to donate toys to children—and the he’s off with a vengeance. Bad children get bags of coal—nasty adults get their eyes gouged out by wooden soldiers.

Structurally, the whole thing is compellingly similar to the post-2001 superhero origin film, with Harry stitching his own suit and familiarizing himself with his own powers and parameters (can he actually squeeze down a chimney?) while growing increasingly confident in his newly self-appointed role as the arbiter of naughty and nice. In that respect, Christmas Evil nails the schizophrenia of the season. Harry believes in the Christmas myth and the supposedly preternatural innocence of children, and so he sees in the adult world a perverse betrayal of this gift. And yet virtue is rewarded within a system of wanton consumption that is itself rooted in exploitation, explicitly represented here by deadening grind of the toy factory laborers who are alienated from children's joy. Before he draws first blood, Harry makes a point to deliver a vanload of pilfered playthings to a children’s hospital—something that would be inconceivable to his bosses without a tax write-off or PR boost. Harry’s psychotic flaw is a radical extremist belief in goodness and absolute moral purity. The problem, of course, is that children are ticking timebombs waiting to become those most criminally vulgar things: adults.

Some trivia for refined cineastes: if Christmas Evil looks incongruously beautiful for a trashy killer santa movie, it's because it's one of the few American films of Argentinian cinematographer Ricardo Aronovich, whose credits include Hugo Santiago’s Invasión, Ruy Guerra’s Cinema Novo landmark Os Fuzis, Louis Malle’s Murmur of the Heart, Andrzej Żuławski’s That Most Important Thing: Love, and several Ettore Scola and Raúl Ruiz films. And yet John Waters routinely cites only one of his films as being among the best ever made—take a stab at which.