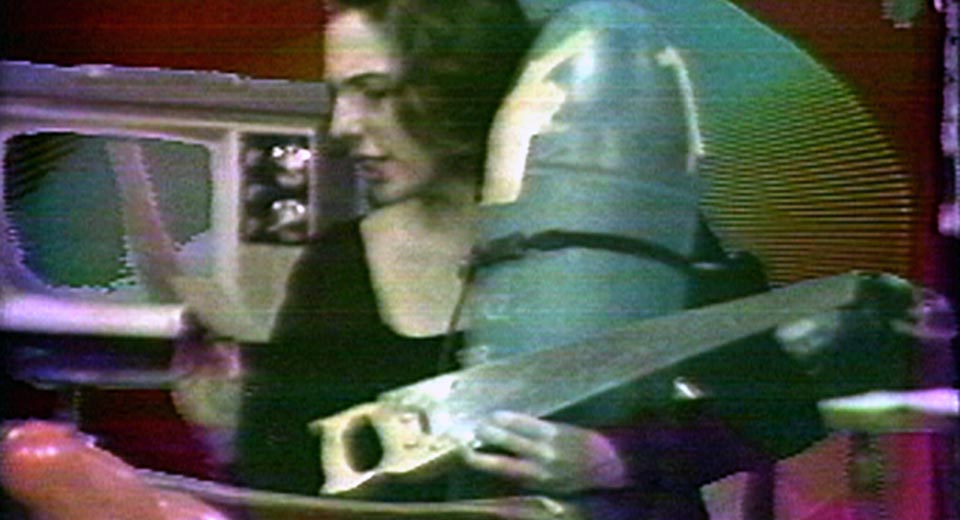 For better or worse, the line between pop culture and “fine” art is more permeable than it has ever been, with artists and pop idols playing out their roles on a shared stage, whether that be the stage of YouTube, Twitter, or the Museum of Modern Art. In the 1960s, however, when the performance artist Charlotte Moorman—a classical cellist by training, an avant-garde agent by inclination—stepped through the glittery curtain of The Tonight Show to play a sample of John Cage’s 26’1.1499” For A String Player, it was a rare occasion indeed.

Moorman, the focus of a fascinating exhibition at NYU’s Grey Art Gallery and a screening tonight at Electronic Arts Intermix (EAI), may be best known, in a sensationalist vein, as the “topless cellist,” who once ran afoul of the law when she performed Opera Sextronique with Nam June Paik, wearing only a skirt. This notoriety, enhanced by her undeniable charisma, inducted her into the glib realm of talk shows, where she was offered to the television audience as a kind of novelty. The setting didn’t seem to phase Moorman, however. If anything the absurdity of demonstrating Cage’s conceptual principles of indeterminacy and non-musical sounds to the likes of Johnny Carson and Merv Griffin—and at one point incorporating Jerry Lewis as a prop instrument—only promoted Moorman’s dedication to the avant-garde.

From 1962 to 1980, Moorman led the Annual New York Avant-Garde Festival, which was held in such non-traditional art venues as Central Park, Grand Central Terminal, and Shea Stadium. Quoted in a bemused Village Voice write-up of the Shea Stadium iteration, Moorman said: “It’s more exciting to take an environment or space and do something with it, than to be in any museum in the world.” Her role in the festivities at Shea involved a daredevil trapeze cello performance, garbed in a purple Flying Cello cape.

Television was just one of the many non-museum environments Moorman performed in, but through the influence of Paik, the syntax and form of TV became an integral part of her repertoire. The screening at EAI highlights Moorman’s exploitation of the televisual with a selection of rarely shown performance documentation, including TV Bed, TV Cello, and TV Bra, and perhaps her most exuberant performance of Cage’s 26’1.1499” For A String Player at the WNET/ Thirteen TV Lab in 1973, collaborating with Paik and filmmaker Jud Yalkut. Here Moorman incorporated cap-gun blasts, a phone call to President Richard Nixon, and a recitation from a box of Wheaties—sounds and incidents that could have drifted over from neighboring programs and commercials. Barbara Moore, independent scholar and a close associate of Moorman’s, will be on hand to discuss the evolution of this performance to its television apotheosis.