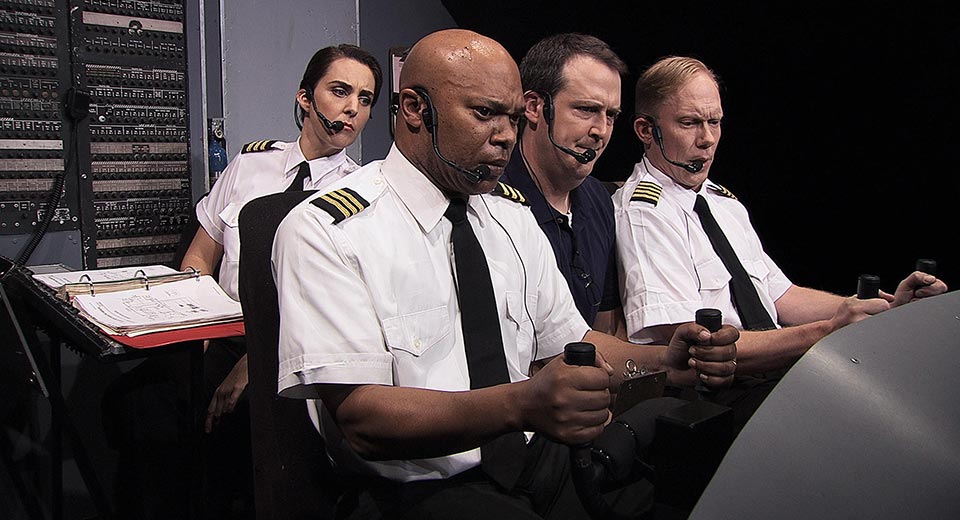 In stark contrast to the overwhelming dazzle and outsized performances showcased in BAM ’s 3D In The 21st Century lineup, Charlie Victor Romeo has nothing in the way of bombast. It is not big, or colorful, or campy. It is an acutely distressing film shot with minimal cast on a single, small set with limited camera action, yet it’s enhanced by its extra dimension as much as Avatar or Hugo .

The film is divided into five segments, each a mostly unaltered transcript from a black box recording of a plane crash – the film takes its name from pilot shorthand for ‘cockpit voice recorder’. Black and white graphics flash technical details to introduce scenes. A lot of what’s spoken is technical jargon, distancing at first, but the lack of comprehension helps bolster the underlying urgency and determination just beneath the lingo. Originally a play, CVR was filmed in front of a live audience. The 3D removes the flattened feeling plaguing so many recorded stage performances, trading the visceral presence of live actors for added intimacy and claustrophobia.

Claustrophobia is not the right term for what’s experienced watching CVR. It is a dread of inescapability, a suffocating feeling when the widest framing only surrounds characters with more flat black void. On the big screen, with so little visual distraction and an added dimension, we cannot escape the horror of the inevitable—there is nowhere to go. We can only watch, paralyzed at seeing the human scale of these immense catastrophes. The viewer, like the plane passenger, is not in control. We are watching the people supposedly in control, realizing how little they actually have, and it is devastating. In one case where human error seems to be to blame—a pilot more interested in flirting with stewardesses than heeding repeated asides about ice on the wing—we learn the crash was due to an inherent design flaw. Another segment has the pilots going over every possible element without success (the terror when something bland as a red binder gets pulled out for review), only to learn the crash was due to a cleaning crew taping over a port.

It is frustrating to hear these last moments. These are professionals working without the luxury of fully expressed emotions beyond initial shock at the situation they suddenly find themselves in. Segments where the crew manage to keep wounded planes aloft for extended periods using all their skills are heartbreaking, creating hope where we know there’s only inevitability. We are with them right until everything cuts out, cuts to black. We remain, having experienced statistics made flesh, the horror of actually finding ourselves in the worst-case scenario. The void, then the reckoning—dry data noting number of survivors and cause of failure, a moot point to those we just witnessed. You may not realize how tense this film has made you until it’s over, when you’re free to be distracted again.