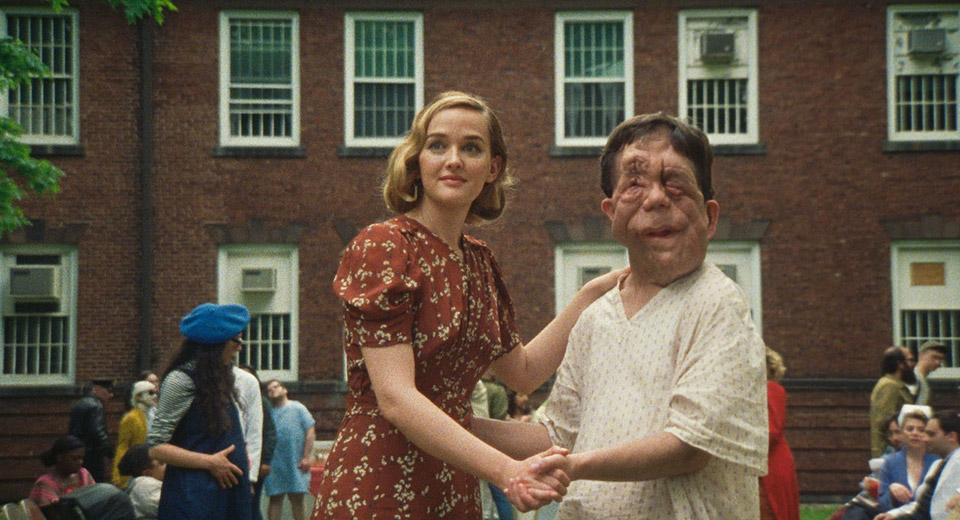 Shorn of the alternating currents of cynical curtain-pulling and grandiose sentimentality that typically render films about filmmaking insufferable, Chained for Life, writer/director Aaron Schimberg’s howlingly funny and deeply affecting second feature, considers the ethical tightrope of transforming flesh-and-blood human beings into fodder for cinema. His film-within-a-film, an asylum-set exploitation thriller, is merely the entryway to a hall of mirrors in which a proliferation of stories and their authors collide.

Well-meaning but glib actress Mabel (Jess Weixler) stars in the American debut of a portentous German auteur played by former child actor and current legal scholar Charlie Korsmo. (On behalf of all 90s children, I want to welcome him back to the movies.) Mabel’s costar Rosenthal soon arrives on a bus with the film’s supporting cast of disabled performers. Activist and British TV presenter Adam Pearson, who in childhood developed neurofibromatosis, which caused tumors to grow on much of his face, plays Rosenthal as a befuddled but charming actor at ease with his disability but frustrated by the demands of film production. His cohort includes a man with gigantism, several little people, conjoined twins and a hirsute woman, all of whom are no strangers to schlocky productions eager to exploit their conditions for freakish atmosphere. Their costars greet them with hilariously patronizing praise and the crew tasks them with “guarding the equipment” overnight after the real talent is ushered off to a hotel. Abandoned on the film’s set, a decommissioned hospital, the second-class performers mount their own, equally unnerving productions. And from there, with exquisitely choreographed long-takes and a paranoid zoom lens, Schimberg slips us into a dreamstate of shifting, echoing realities.

One highlight is an astounding scene in which Mabel and Rosenthal view dailies alongside the cast and crew. Schimberg holds on a closeup of Mabel and Rosenthal as multihued lights flash across their faces while they watch their characters meet onscreen. On the soundtrack we hear Mabel’s failed German accent deliver stilted dialogue about her character’s acceptance of Rosenthal’s character’s disfigurement, but we see Mable herself silently considering her own discomfort with her costar’s condition. It’s an honest moment free of stark revelations and one that typifies the film’s dizzying yet moving deconstruction of performance and reality.