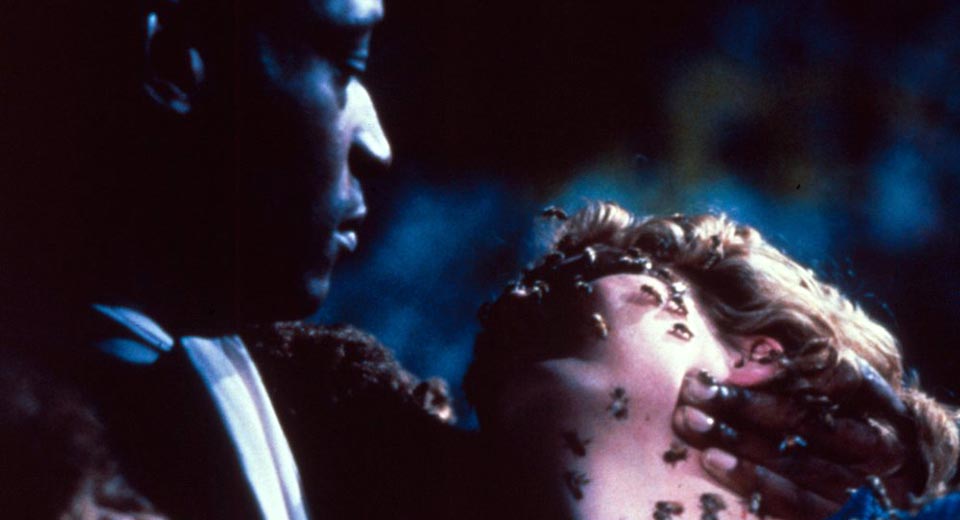 Running through February 18, BAM’s Fight the Power: Black Superheroes on Film takes an expansive look at superpowered heroes and villains alike. Tonight’s Candyman embodies the sweet and sour approach, with Tony Todd playing one the most simultaneously terrifying and sympathetic horror icons.

According to the urban legend, if one speaks Candyman's name five times while looking into the mirror, his ghost will materialize to eviscerate the caller with his gory hook hand. Helen Lye (Virginia Madsen) is a graduate anthropology student in Chicago writing her thesis on the myth. After overhearing Helen's research interviews, a university custodian plainly tells her that Candyman lives in the Cabrini-Green housing project, a real-life location considered an exemplary monument to failed public housing. Lye visits the projects with her more cautious counterpart, Bernadette (Kasi Lemmons, soon-to-be director of Eve’s Bayou), where they initially find evidence that “Candyman” is the alias given to killer who has found a way to infiltrate apartments by sneaking through the medicine cabinet fixtures. In Helen’s view, the legend of Candyman—that he’s the avenging spirit of a black artist killed by a lynch mob in the late 1800s after siring a child with a wealthy white woman—exists as a psychological coping mechanism for the projects. A horrific act of violence seems to confirm this conclusion, thereby diminishing the myth—which, naturally, does not sit well with the real Candyman. Enter Todd, a brooding vision of death in the seductive mold of Dracula whose deep voice sends sends ripples through the screen as he whispers to Helen: “Be my victim.”

British filmmaker Bernard Rose was hired to write and direct on the strength of his dark fantasy Paperhouse, a slowburner whose disquieting dread established the tenor of Candyman, enhanced here by Philip Glass’s now-classic score. It was Rose’s idea to transpose Hellraiser author Clive Barker’s short story “The Forbidden” from the author’s native Liverpool to Chicago’s public housing in order to explore the way fears are drawn along racial, cultural, and physical/geographical boundaries. Candyman arguably pulls off the delicate balancing act of playing to real-life anxieties without limiting its portrayal of black lives to violent stereotypes, explicitly referencing the continuing legacy of white supremacy in the creation of the “bad part of town.” At the same time, it offers in Helen a smart and sympathizing protagonist while nevertheless suggesting a headstrong sense of white entitlement that enables her research. When producers approached the NAACP with the script, the organization supposedly responded positively by saying, “Why shouldn't a black actor play Freddy Krueger or Hannibal Lector?” But Candyman is more than colorblind casting—he’s a horror icon built on the very premise of fears surrounding race and class in America.