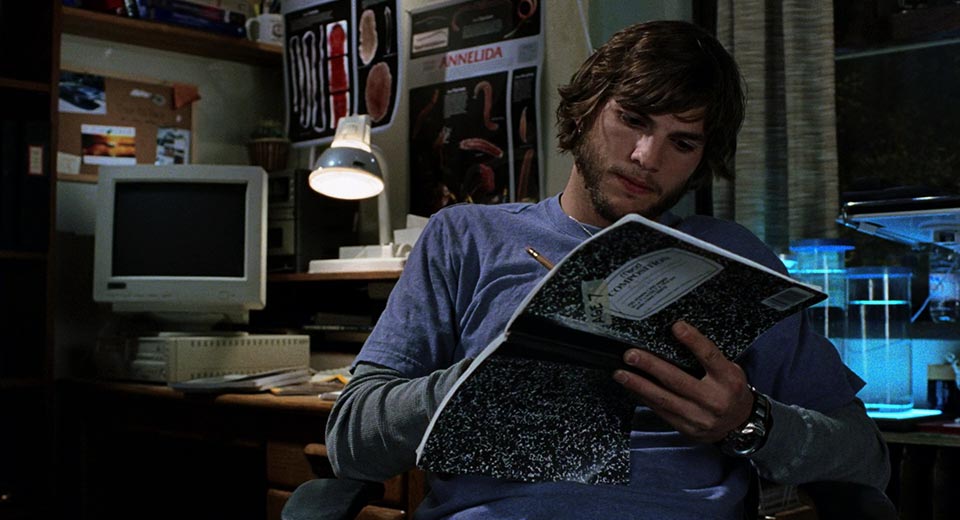 What if meteorologist Edward Lorenz hadn't presented his paper "Predictability: Does the Flap of a Butterfly's Wings in Brazil Set Off a Tornado in Texas?" in 1972? Would the phrase "butterfly effect" have ended up in Dr. Malcom's mouth in Jurassic Park? More importantly, would 2004's The Butterfly Effect have been possible? Think about it: a scientist delivers a lecture in Washington, D.C., and decades later a film crew gets $13 million to dress up Vancouver as a fictional upstate New York town. A small perturbance in the atmosphere...

Ashton Kutcher's first foray into non-comedy after Dude, Where's My Car? (2000) and Just Married (2003), The Butterfly Effect is a little bit Sophocles, a little bit Philip K. Dick, and a whole lot of adolescent fatalist angst. Like screenwriting duo J. Mackye Gruber and Eric Bress's other cult hit, Final Destination 2, it plays by the rules of Greek tragedy: once the gods have decided your fate, all attempts to change it will only make it more unavoidable.

Evan has problems. We see him at ages seven and 13 and as a college senior, his traumatic past unveiled in flashbacks. Therapists' efforts to access patches missing from his memory only lead to psychogenic seizures because they don't understand his real problem—that he really can change the past with his mind. Most tragically perhaps, he suffers from the adolescent male fantasy that even though you're perceived as a freak you're actually a misunderstood genius.

The fact that seven-year old Evan is disturbed is signified by a drawing he does that looks like if Tim Burton did a Limp Bizkit album cover; it shows him standing over his dead parents with a bloody kitchen knife, the frantic pen marks scratched deep into the paper. It's an example of how The Butterfly Effect relies on clichéd notions of deviance (animal torturer, pedophile) and uses tried-and-true archetypes to signify a bad outcome in life (crack whore, cancer victim, double amputee). Were the rumored remake ever to materialize, a bit more nuance could be used in categorizing characters' lives into successes and failures, beyond genius vs. cripple, popular frat boy vs. supermax inmate.

Notice this goof: to establish the 1990s setting, the movie theater the 13-year olds go to is showing Dumb and Dumber and Se7en. However, Dumb and Dumber came out in December 1994, while Se7en didn't hit theaters until September 1995.