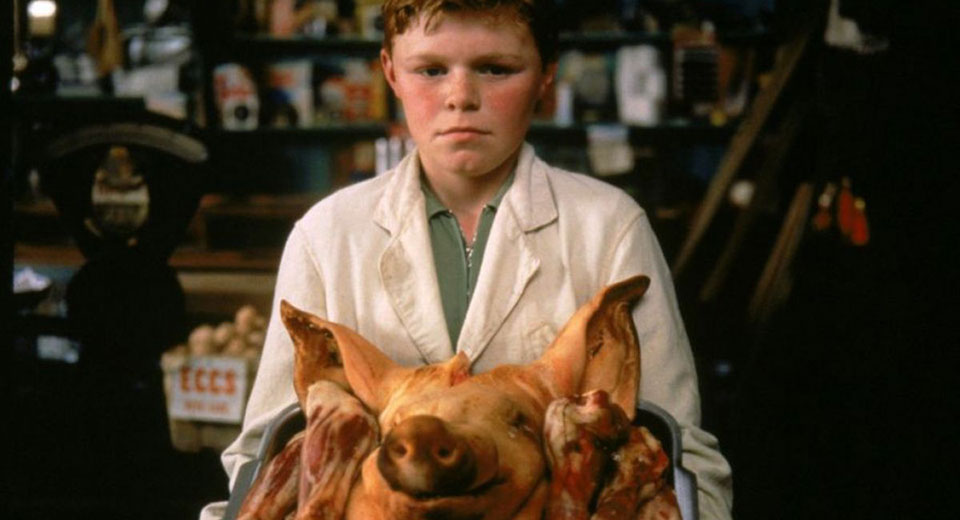 Neil Jordan’s 1998 The Butcher Boy resembles something like a middle schooler’s A Clockwork Orange. Its 12-year-old hero, Francie Brady, lives in such a perfectly managed world of his own juvenile creation that it only seems natural for him to carry all the violence he sees in Lone Ranger episodes and Cold War-era news reports out of the tube and into his small Irish town. Brady spends his days yelling obscenities at fish, starting fights at dance halls, and stealing apples and comic book from his posh neighbor, Mrs. Nugent. When Mrs. Nugent retaliates by slandering Francie’s whole family as a bunch of lower class pigs, Francie develops a single-minded pursuit of pranksterish revenge – destroying her cakes, demanding she pay made-up street taxes, falling to her floor and acting like a pig – that doesn’t waver even in the face of his parents’ death and his own inevitable institutionalization.

As Francie’s antics grow more sociopathic, the film grows increasingly disjointed. A running voiceover track delivered by an older Francie in bitter, sardonic tones at first works to establish the timeline and background of the action, but eventually it starts directly interjecting itself into scenes. Once it prods Francie into defecating on Mrs. Nugent’s living room floor, the film’s form has fully sputtered into Francie’s chaotic, anti-authoritarian, and belligerent world view. This is also exemplified by the fear of nuclear armageddon which hangs everywhere, and represents as much of an existential threat to the passive social order as Francie’s unwavering commitment to letting his juvenile impulses run rampant. The Butcher Boy ultimately links the apocalyptic in the everyday collective imagination with Francie’s own choice to revel in his own childish fantasies rather than accept tragic realities. It shows how fantasy is as much a source of our anxieties as a balm.

The Butcher Boy is introduced by Ari Aster at Alamo Drafthouse Brooklyn tonight as part of a double feature with Aster’s own Hereditary.