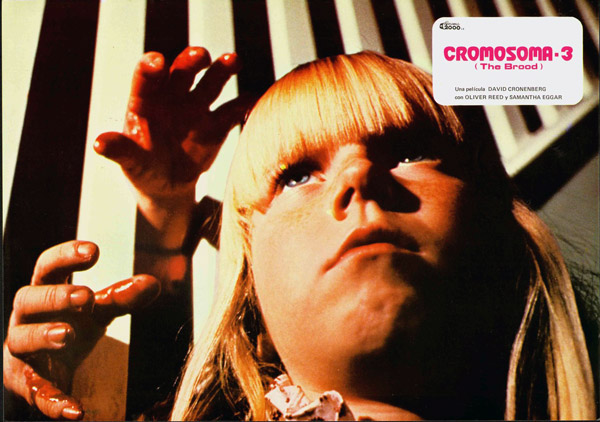 If five-time Oscar winner Kramer vs. Kramer, released in 1979, is a sentimental reflection of shifting attitudes about divorce and the changing roles of mothers and fathers in their children’s lives, then The Brood , released the same year, is a window into a deeply paranoid collective panic about those changes, as well as the inherently problematic nature of family life itself.

Art Hindle stars as Frank Carveth, father to a chillingly emotionless little girl named Candice. Candice’s mother Nola (Samantha Eggar) is a disturbed woman undergoing treatment at The Somafree Institute of Plasmatics, a cluster of low-slung buildings on an otherwise empty and frozen Canadian plain. True to Cronenberg’s fascination with secretive and ultimately destructive institutions (“ConSec” in Scanners, “Bartok Science Industries” in The Fly, “Spectacular Optical Corporation” in Videodrome), Somafree is a vaguely sinister psychoanalytic institute run by Dr. Hal Raglan (Oliver Reed), who hypnotizes and then role-plays with his patients until they release long-suppressed rage at their abusive mothers and neglectful fathers. This release of repressed rage mysteriously—or plasmatically—takes the form of actual physical changes to their bodies. Nola is Dr. Raglan’s star patient, because when she starts ranting against her own “fucked up mummy,” her rage takes the form of actual, small, human-like beings which emerge from her abdomen, resulting in a large brood of autonomous penis-substitutes. Complete with their little winter coats and blonde hair, they look remarkably like Candice (as well as the small, elusive killer in Don’t Look Now). These rage babies go about spastically bashing in the heads of those who have hurt or threatened Nola. She’s not consciously aware of the murders taking place, but she feels remarkably better about things after they do.

The Brood is especially obsessed with the cycle of psychic violence perpetrated by mothers and is downright cautionary about the horrific dangers of encouraging women to release their repressed feelings or sexual desires. (Cronenberg made the film during his own divorce and custody battle.) Nevertheless, the film is a thoroughly fascinating Freudian nightmare of epic proportions. As Freud maintained, the nuclear family is forever. In seeking to abolish “the family, the germ-cell of civilization, we cannot, it is true, easily foresee what new paths the development of civilization could take; but one thing we can expect, and that is that this indestructible feature of human nature will follow it there.” Also, “Man is wolf to man.” (Civilization and its Discontents, 1930)