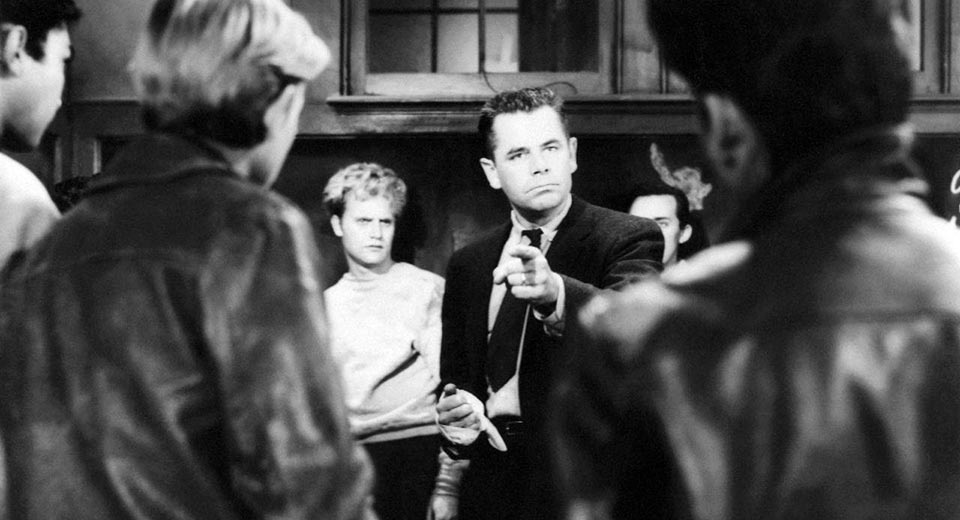 The other day a tweet caught my eye: "I physically cannot bond with people who never had to inexplicably learn how to square dance at their run down elementary school." I hadn't thought about this strange compulsory promenading since childhood, but my curiosity was piqued by the revelation that this was not an idiosyncrasy of my particular midwestern public education. I assumed some nefarious foundation. I was not wrong. Google teaches that square dancing in public schools originates in a 1920s campaign waged by Henry Ford to counteract the corrupting influence of jazz music, a cause that he pursued through the final years of his life in order to teach children, per one account, "social training, courtesy, [and] good citizenship."

The Blackboard Jungle (1955), with its licentious Bill Haley & the Comets theme song inveigling youths to "rock" – "around the clock" – must have sent Ford rolling in his grave. In his academic survey Rock 'N' Film, the inspiration for a series opening tonight at Anthology Film Archives, David E. James describes it as the first appearance of rock music in film. James writes that with this gesture, The Blackboard Jungle lays the ground for "the spectacle of [rock] musical performance and the narration of its meaning." That meaning, in the film's opening sequence, manifests in kids throwing dice, roughhousing in the schoolyard, and catcalling female teachers. Their delinquency sets the stage for the arrival of new teacher Richard Dadier (Glenn Ford), a navy veteran who eventually must win the students over despite the seeming determination of some to ruin his life. MGM fretted that the script may be read as communist propaganda — after all, among a mixed race cohort, only the white students prove behaviorally problematic, and the film suggests structural, sociological roots. Consequently, it was banned in Tennessee and Georgia, stricken from the Venice Film Festival lineup at the urging of the U.S. Ambassador to Italy, and excoriated in the dubious findings of a Senate Judiciary Committee investigation into juvenile delinquency.

Despite the red scare, the film also represented a new stage in media capitalism, with the synergistic marketing of song and film making hits of both. And therefore The Blackboard Jungle lends itself to the series thesis, which "explores the music's contradictory potentials, balancing rock's capacity for utopian popular cultural empowerment with its usefulness within the capitalist media industries." But in any case, it kicks the shit out of shuffling around to "Cotton-Eye Joe."