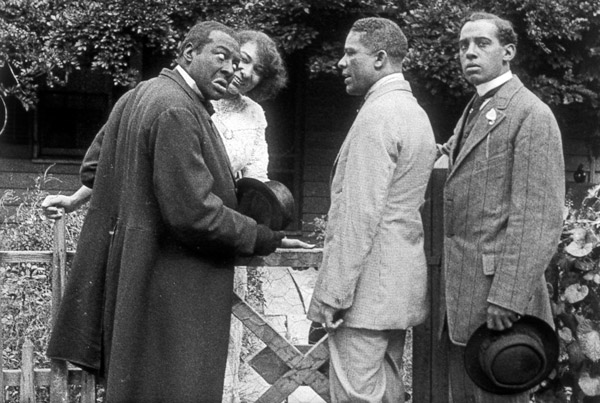 Over a century ago, the pioneering black vaudeville star Bert Williams (1874-1922) joined an all-black cast at Biograph studios in the Bronx to make a feature film based on the popular Lime Kiln Club stories, a syndicated series. An hour of footage was shot, including elaborate crowd scenes featuring a parade, a picnic and a cakewalk, a group dance that Williams and his partner George Walker popularized years earlier on the vaudeville circuit. The completion of the film was delayed for unknown reasons. Eventually the studio shelved the project completely – in unlabeled cans no less – where it sat for decades. In the late 30s when Biograph went bankrupt, MoMA’s film curator Iris Barry procured its collection of negatives. Unnoticed, the footage was moved to a new set of shelves where it sat for several more decades. It was discovered among other material in 1976, but remained unidentified until recently. Today’s screening, the product of years-long research, presents a historically significant opportunity to see the earliest known surviving feature film with a cast of black actors.

The plot of the film involves Bert Williams’ attempt to become a member of the “Lime Kiln Club”, a social organization akin to a country club. He attends their “field day”, which features a parade, dancing, foot races and a merry-go-round with suburban Bronx houses visible in the background, and tries to woo a charming lady (Odessa Warren Grey). In MoMA’s words, the film employs a “transitional blending of minstrel stereotypes and contemporary black representation,” asserting that Bert Williams wears blackface because he had light skin and this was the only way he could appear alongside darker-skinned actors at that time.

In fact, Bert Williams and George Walker had worked for many years to great acclaim in vaudeville with Williams appearing in blackface at a time when vaudeville was occupied mostly by whites, many performing racist caricatures in blackface for white audiences. Williams and Walker promoted themselves as “the real thing” and became famous performing more varied material for both white and black audiences, so it makes sense that Williams would appear in the film in the way that his many fans would have recognized him. Williams and Walker inverted the vaudevillian tradition of having light-skinned performers play the “straight man” and dark-skinned performers play the “fool”. As the first black actor ever to join the Ziegfeld Follies and an early champion of black performers’ right to form their own unions, Williams was actively engaged in political struggle and used the subtleties involved in black representation at the time as comedic raw material with great success. He maintained, “To cork your face and talk politics is not minstrelsy.”

Plenty has been written about the cakewalk, which has a complicated and convoluted history as a social practice. In a cakewalk, participants take turns walking or dancing two-by-two down the center of a group cheering them on. Its most probable precursor is the “prize walk” from the late 19th century, a mannered parade ritual practiced on southern plantations by upper class whites (cakes were a common prize). Blacks and poor whites appropriated the dance, subverting its original signification with a healthy dose of satire. Williams and Walker and other black performers informed decades of vaudeville and mainstream theatrical performance by contributing additional layers of irony to the cakewalk as a cultural referent. The Lime Kiln Club film features a glorious example, full of wit and humor.