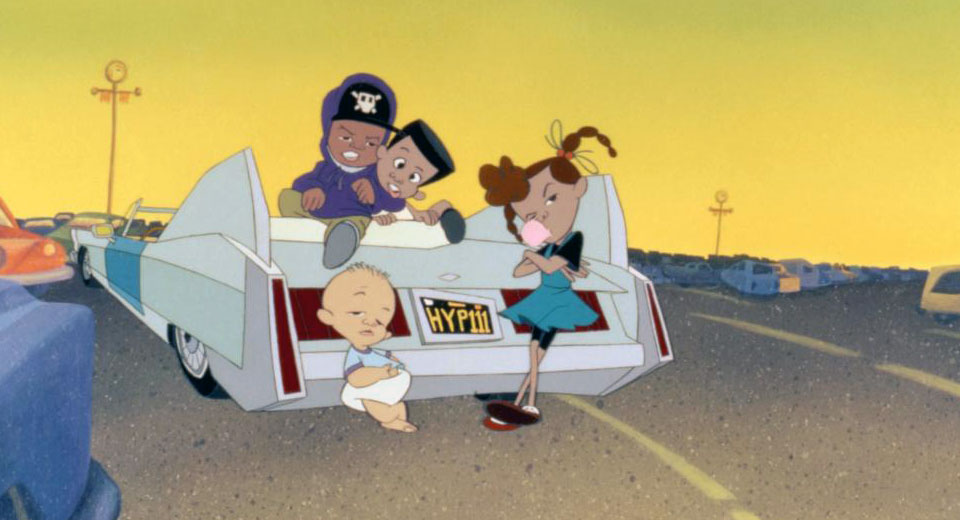 Feature length animated films focusing on Black people and Black culture are hard to come by. A quick Google search reveals that one can probably count the number of animated feature films centered around Black characters on one hand (including Disney’s The Princess and the Frog and a few others), and few of these are written or directed by people of color. This disheartening reality makes Bébé's Kid (screening tonight on 35mm at 7:00 pm at Brooklyn’s Alamo Drafthouse) even more special. The film is the product of a high watermark in the 1990s when Black aesthetics were finding wider audiences in popular visual media with shows like In Living Color and in films like House Party and the work of Spike Lee.

Bébé's Kids boasts a script by Reginald Hudlin based on the stand up of late comedian Robin Harris, who earlier played Kid’s cantankerous father in Hudlin’s film House Party. In the film’s opening, footage of the comedian’s stand up act—animation dancing around the image’s edge, as if the viewer is slowly being initiated into the animated world—sets the tone and rhythm for the humor to come.

Harris’ exhausted, mumbled, fed up delivery is the impetus for the entire project that is Bébé's Kids; his persona is half W.C. Fields and half Redd Foxx, a grumbling, irritable everyman who is trying his best to impress the woman he’s interested in by tolerating a trio of kids hell bent on destruction. The destruction Bébé's kids unleash however is targeted at something of symbolic importance—a Disneyland-like amusement park—a monument to American whiteness and the fantasies that enable its tendencies toward oppression.

In fact, Bébé's Kids is not the only film of the decade to depict Blackness as the wrench in the works of a consumer fantasyland. Beverly Hills Cop III introduces Black Detroit police officer, Axel Foley (Eddie Murphy), into the cheery, whitewashed harmony of Wonder World. By climbing into whimsical costumes and going behind the scenes into the bowels of the park, Foley manages to bring it all crashing down.

Bébé's Kids is funny and hip, and while the “kids” are crass and street smart, in the end they’re kids. From this comes some of the film’s most poignant and endearing moments, particularly when the crew breaks free from a stultifying ride, leading the other kids aboard on a mutiny to invade a toy shop. The kids scatter and each grabs their desired toy. LaShawn, the tough young girl of the mischievous trio, gleefully digs through a pile of Barbie-like dolls until she finds a Black one. She hugs it to her and smiles with pure joy in a moment that is cute and heartbreaking.