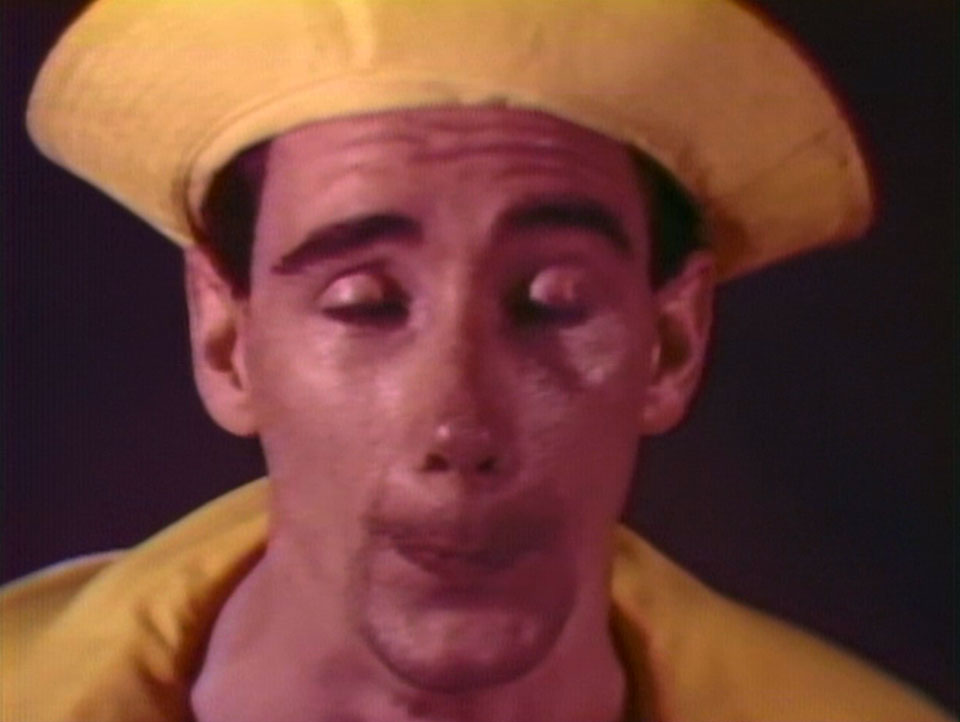 This evening, inaugurating a summer-long series of online screenings of the moving-image works of Mike Kelley, Electronic Arts Intermix (EAI) and the Mike Kelley Foundation for the Arts will present the artist’s 1983 video The Banana Man. Made during a teaching stint at the Minnesota College of Art and Design, conscripting his students as assistants and performers, the video is considered by Kelley—long averse to straightforward documentation of his performances—to be his first bonafide solo video work, an extension of his prior forays into dead-pan monologue and an important early entry in the development of his career-spanning interest in lo-fi aesthetics, pop culture detritus, and memory reconstruction.

In what is essentially a fractured one-man stage show, Kelley performs a series of skits meant to probe the psychological inner-workings of the video’s titular character, based on a recurring performer of the same name from the children’s show Captain Kangaroo. Kelley has made clear that he did not watch the Banana Man on television as a kid, instead drawing from his recollections of his classmates’ playground recaps of the character’s antics: namely, the Banana Man’s habit of pulling props out of a many-pocketed suit accompanied by a high-pitched ‘ooh.’ From these two qualities, Kelley infers a full-ranged transient and pathetic subject, a sort of Emmett Kelly clown lacking any semblance of fundamental agency, at the complete whim of the video’s abruptly shifting bare-bones environment and only barely in control of the objects he summons. Says the Man in one early and typical scenario, in which a figure holding a sign reading ‘My actions’ jumps onto him from a chair: “My actions! I can’t run by myself! I’m not responsible!”

In 1982, just before this tape’s completion, art critic Howard Singerman had singled out Kelley (along with Chris Burden) as embodying a budding post-modernist preoccupation with the figure of the adolescent, a paradoxical state Singerman loosely defined as whence “the desires of childhood reassert themselves and resist the transformation that is the goal of adolescence.” He saw a shared tendency in the coterie of then just-maturing late Boomer performance artists to haphazardly skirt around the purported values of modernism, to pick things up with heated fascination only to discard them noncommittally moments later. A generation emerging from the proliferation of post-sixties MFA programs, headed by conceptual artists and their accompanying experimental pedagogical practices (affording something like an extended adolescence in its own right), these artists were embarking on an awkward and lusty differentiation process, engaged in a futile reach for autonomy and then playing dead to escape its consequences.

In the ‘90s, Kelley would write in an introduction to Ted Post’s schlock-o thriller The Baby (1973) stating that, plainly, “the filmic experience is one of regression.” He points to the womb-like darkness of the movie theater, the heightened ‘suspension of disbelief’ caused by the temporary evacuation of the ego, and the trance of hyper-identification often entered into by the viewer. He suggests, then, that films that take infantilization as their subject can often temporarily deactivate this effect in ways not unlike the deconstructive techniques of the ‘art film,’ especially when coupled, as The Baby is, with a disarming and unexpressive realism.

Kelley could just as easily be describing his The Banana Man, with its ingratiating sad-sack man-child (the phrase “learned helplessness” comes to mind) wrested from the colorful kiddiescape of post-war educational TV and into the grainy and no-frills artists’ tape. The Banana Man, though pitiful, might resonate with today’s viewers, house-confined (some, even, to their childhood homes) by quarantine and mandatory municipal curfews, disempowered by gig economy malaise and patronizing Memphis School tech design, somehow in perma-beguilement of luxe clickbait videos featuring knives cutting into hyper-realistic cakes.

Tonight’s streaming engagement will be followed by a conversation with no stranger to the uses of infantilization, contemporary (and later collaborator) of Kelley, artist Michael Smith. In 1978, Smith debuted his running alter ego Baby Ikki, an egoless adult baby birthed from the psychoanalytic discourse of performance art, an experiment in genderless and polymorphously perverse renegade street-theater. (Ikki can later be seen watching, à la Chauncey Gardner, Post’s The Baby before descending upon Burning Man, in Smith and Kelley’s 2009 video and installation work A Voyage of Growth and Discovery .) Smith will be joined by Ying Liu and Cauleen Smith, two highly adept multidisciplinary artists similarly attuned to the seemingly quotidien.