The Ballad of Narayama 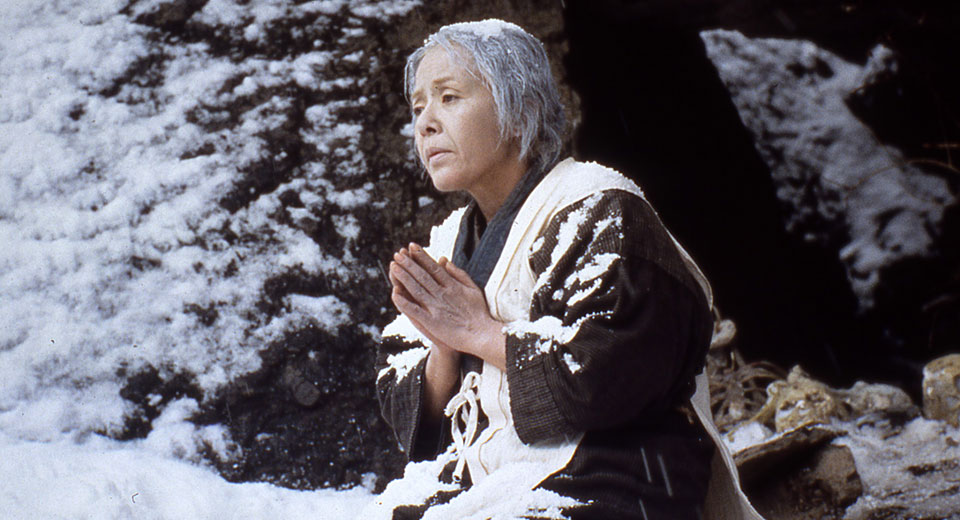 Shōhei Imamura imperceptibly shifts from scabrous humor to unspeakable horror and, finally, to heart-wrenching profundity in his 1983 Palme d'Or winner, The Ballad of Narayama. He mulls the familiar territory of the human life cycle without sentiment or cynicism by chronicling the death rites of 19th century subsistence farmers, sparing no detail in his documentation of Darwinian struggle, even as he carves out a space just large enough for a small glimmer of ennobled humanity to transcend the mire.

Long abandoned by her husband, Orin (Sumiko Sakamoto) is 69 years old and a mother to two grown sons: hotheaded patriarch of the Neko family (Ken Ogata) and Risuke, a foul-smelling dog-fucker so repugnant her refuses to work the fields until a woman consents to lie with him. To appease their preeminent deity, the village follows a practice of leaving elders to starve atop a mountain summit after their 70th birthday. Despite excellent health, Orin eagerly anticipates her final trek, even as her family expresses resistance to the ancient tradition. Her resoluteness clashes with the unwilling elders who claw and scream against the custom, forcing their children to bind them in order to fulfill the mountain's demand. The village desperately needs her to cook and care for the sick and the young children, but she refuses to evade fate.

As Orin readies herself for death, her kith and kin pursue the appetites common to man and beast. Imamura repeatedly cuts to wildlife mating and killing (or both, in the case of the mantis) as his human characters struggle against the demands of civility between their own bouts of lust and violence. Survival casts a shadow over every fistfight and birth as crop yields determine which families will survive winter. Mountain superstitions provide a respite from the Hobbesian world below, nourishing the flower of their better selves.