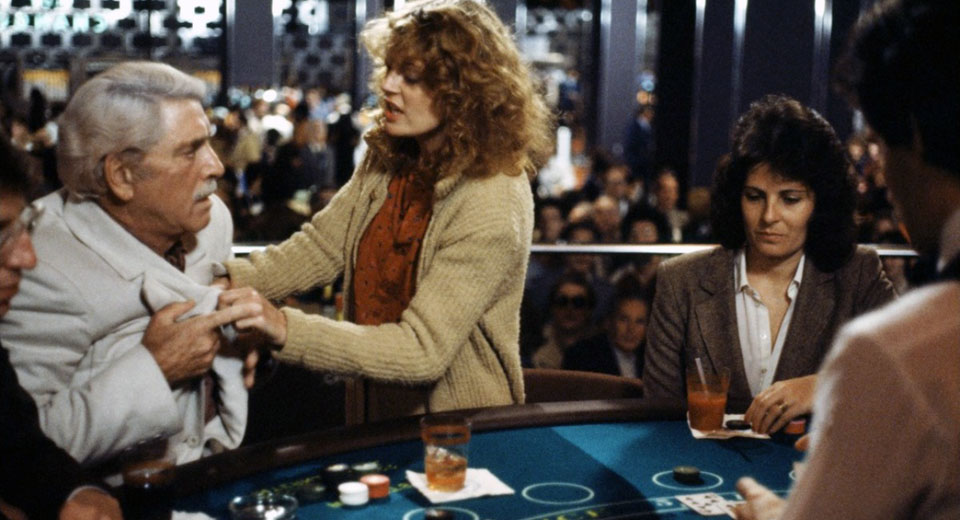 In a foreword to a collection of John Guare’s plays, Louis Malle lauds him for his “contempt for conventional psychology and plot coherence.” Atlantic City , Guare and Malle’s 1980 collaboration made with Canadian Film Development Corporation money and shot on location in the eponymous city, uses a drugs-and-gangsters narrative as a more or less arbitrary frame for a series of observations on old age, making ends meet, and death, completely free of ponderousness.

In Philadelphia, a semi-hippy vagabond named Dave (Robert Joy) spies a dealer hiding cocaine in a phone booth, then slips in and snatches it before its intended recipient. Together with Chrissie (Hollis McLaren), his pregnant new-agey girlfriend, he comes to Atlantic City to stay with his estranged wife Sally (Susan Sarandon) who serves oysters at a casino and is training to be a blackjack dealer. To help him sell the dope, Dave recruits Sally’s neighbor Lou (Burt Lancaster), an ageing numbers bookie and caretaker of the bedridden former stage diva Grace Pinzer (Kate Reid). Dave’s death at the hands of the dealers he ripped off unites Sally and Lou as unlikely lovers, and Chrissie and Grace as healer and patient.

Around this framework, an old man rediscovers pleasure in living. After his first $4,000 dope sale, Lou buys a flashy cream-colored suit, shocks Grace with his newfound virility, and becomes an extravagant tipper (“Sinatra gives wings to hospitals; we all do what we can”). Having started out wistful and nostalgic, reminiscing to Sally about his golden years running guns with Dutch Schultz and sharing a cell with Bugsy Siegel (“You shoulda seen the Atlantic Ocean in those days,” he laments, as if this geographical body were as susceptible to changing trends as the restaurants on the boardwalk), Lou now exists to carpe diem (“Buddy, you live too much in the past,” he exhorts his old friend). His rebirth reflects that of America’s Favorite Playground, which we see promoting its renewal efforts with billboards (“Atlantic City: You’re Back on top. Again”) and fundraiser performances by wide-lapelled lounge singers (“Nice to see you born again, Atlantic City my old friend”).

Guare delivers a major part of his laughs through Chrissie the psychedelics-casualty, who makes declarations like “I never use seatbelts—I don’t believe in gravity,” and “The difference between Hare Krishna and Christianity is that Krishna is real.” Well-disposed audiences will appreciate Da Grosa Funeral Home’s off-kilter motto, “We Understand,” an absurdly enraged Michel Piccoli shouting “Focus!” to his terrified casino floor staff, and Wallace Shawn's pre-Andre cameo as a waiter who mispronounces French wines.

Atlantic City is worth seeing for the vertigo-inducing chase across moving parking lot elevators alone, but its take-home lesson is Lancaster’s innocent exuberance. It’s inspiring to see in a man in his late sixties jump up and down and clap his hands upon recognizing himself in a mugshot on TV, with no regard for the consequences. Any moment could be our last; maybe ageing with dignity has to involve a recognition of this fact.