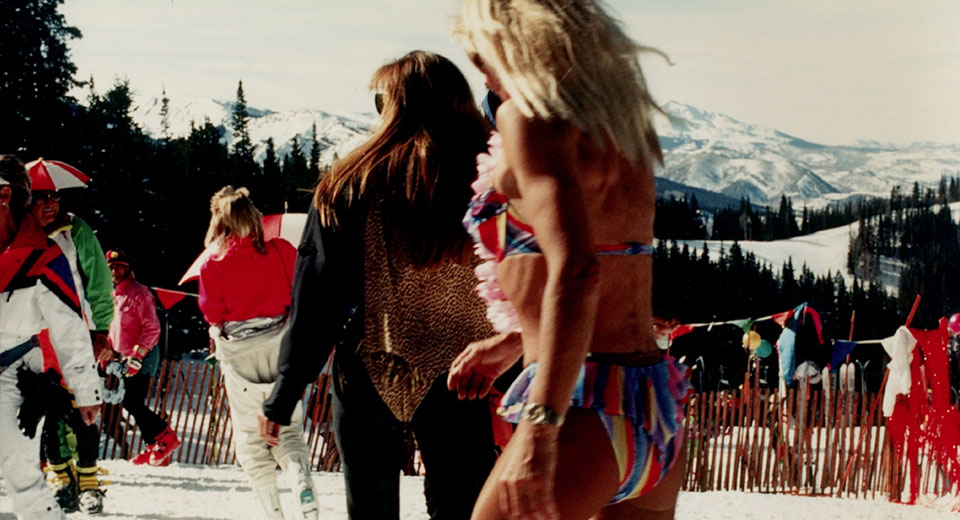 Opening on a ski jacketed bride and groom struggling to make their vows heard while flying in a hot air balloon, Frederick Wiseman’s Aspen captures the waning days of the Reagen/Bush era as a culture full of so much hot air. From the rhinoplasty surgeon championing his ability to fix ethnic noses to the painter claiming Reagan inspired her to paint Pepsi machines instead of abstract art, the upper-crust denizens of Aspen, Colorado are the living, breathing embodiments of superficiality.

One of our foremost chroniclers of the absurdities and contradictions of American life, Wiseman forgoes any simple indictment of the rich in lieu of teasing out the complex issues of class and race undergirding this whole snowy idyll. The film is filled with radical juxtapositions of haves and have-nots that range from the shockingly obvious (a cut between bikini clad-revelers dancing in the blindingly white snow to the cavernous environs and mechanical hisses of nearby silver mine workers) to the deceptively simple (women performing calisthenics to Opera music slowly gives way to shots of the dirt-roads and decaying houses which make up the working-class neighborhoods lying on the Aspen’s periphery).

Eschewing conventional narrative ideas of individuality and psychology common to popular cinema, Wiseman focuses on Aspen as an institution while still emphasizing the myriad nuances of the individuals who populate it. A scene of middle-aged men discussing the Bible’s stance on divorice is as memorable for one man’s warmly-met comment that divorice condones domestic abuse as it is for the diverse array of holistic and well-articulated opinions on display. Even if these white well-to-do don’t only appear concerned getting manicures and buying tacky overpriced sweaters, Wiseman never contents himself on settling for appearances, digging deep into the systems and psychologies that prop up this narcissism.