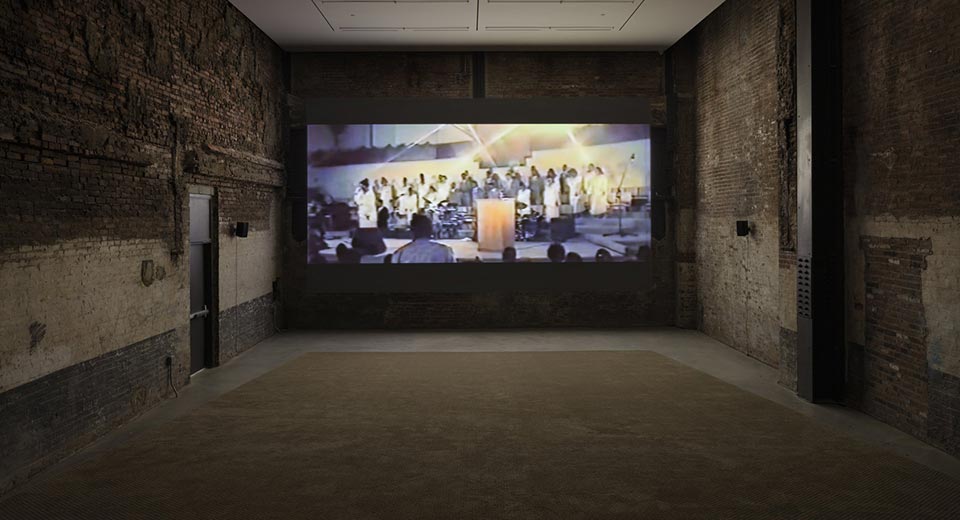 It’s strange to think that Air Above Mountains, Unknown Pleasures is Arthur Jafa’s first solo exhibition in New York in nearly two decades. Yet Jafa has returned with a body of work that is both more ambitious and disarmingly less pretentious than nearly anything his peers are doing.

Upon entering the gallery, the first object encountered is a photographic self-portrait of the artist in a voluptuous dress made from a bulging leather girdle and delicate white fabric—and from this mysterious beginning, the show gathers force as it accumulates more images: a paparazzi photo of Whitney Houston; two youngblack men and the grinning white mob that lynched them; mutilated bodies from African wars; Rihanna; Kurt Cobain; Miles Davis; Walt Disney; stills from La Jetée and I Walked With A Zombie. At first glance these prints and collages seem to offer little of themselves, even though the content of nearly every image is immediately recognizable. Over time, an aesthetic sense emerges, anchored in black American music and black bodies. But there is also Sid Vicious and Led Zeppelin, so if we want to confine Jafa’s work to a commentary on blackness in America, we’ll have to admit that that can also include an interest in white British Punk and Robert Plant.

If there is a key to what Jafa is trying to do, the new video piece akingdoncomethas seems like the place to go looking for it. What remains topological and enigmatic in the still images, can seem momentarily clarified in the long clips of black gospel performers, black pastor’s sermonizing, and footage of the wildfires that recently engulfed Los Angeles. The transcendent performers suggest the possibility of actual transfiguration. The scenes of cars, houses and whole mountainsides engulfed in flames echo biblical destructions. And when threaded together, these images make a powerful argument for their inherent spirituality—which Jafa acknowledges from a position of reverence for both the spirit and the object.

For all of its emotional force, Jafa’s work is full of ambiguities and few definitive statements. For instance, it asserts a genuine belief in the power of these images to change another human being. But it also admits to the risk that one becomes “church-ized”—in the words of one of the video’s pastors. You walk through the gallery, and you watch the video. Which makes you feel cultural and satisfied. You have not, however, been changed, and perhaps don’t intend to be. So what good then are the objects, and what good is art?