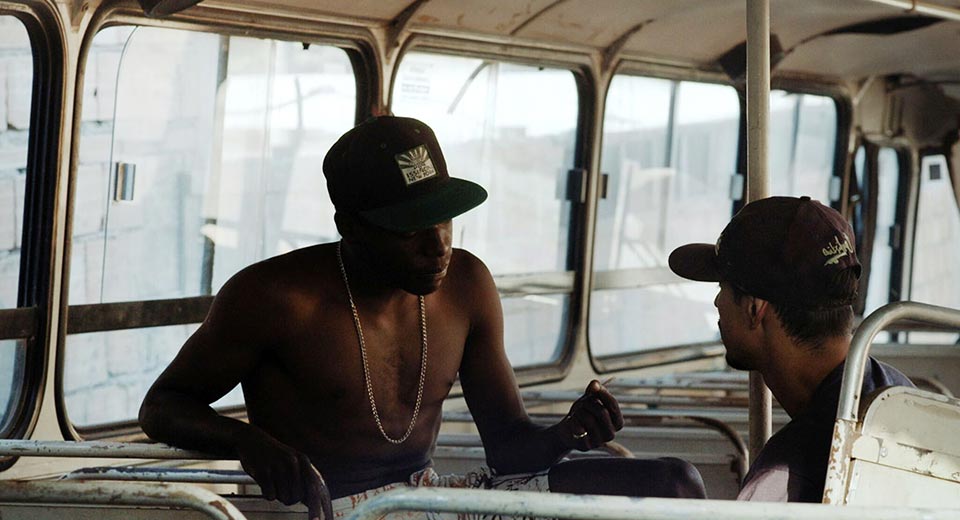 In the words of the young itinerant laborer Cristiano (Aristides de Sousa), João Dumans and Affonso Uchoa’s Araby is “The story of how I stood up for myself, of how I won and lost.” When Cristiano dies of exhaustion working at the local foundry in Ouro Preto, a small industrial town in Minas Gerais, Brazil, teenaged André (Murilo Caliari) finds a journal Cristiano had been assigned to keep by the foundryworkers’ drama club. In modest, bare-essentials prose, Cristiano recounts his path from a year and a half in prison for a botched car theft through dozens of odd jobs to the present, from Contagem and Paraíso to Itabira and Ouro Preto, from picking fruit in orchards to renovation work and highway construction. Along the way he meets Barreto the agitator, Cascão the ex-convict, and Ana the textile factory worker, friends, heroes, and lovers who all ultimately disappear from his life. He retells the stories of those he encounters, like a fruitpicker whose father organized 200 orchard workers in the 1970s, went on hunger strike in prison, and met labor union hero and former president, Lula (whose protégée, Dilma Rousseff, was impeached as president of Brazil last year). After sleeping in abandoned warehouses, being cheated of his wages, and losing a child to miscarriage, Cristiano winds up in Ouro Preto breathing bauxite and aluminum until he loses his hearing. By the end of his short life, he dreams only of getting his fellow foundryworkers to abandon the machines, throw away all their money, and spend their days drinking water and sleeping into the afternoon. A humble dream confided to an audience hopefully humble enough to recognize its beauty.