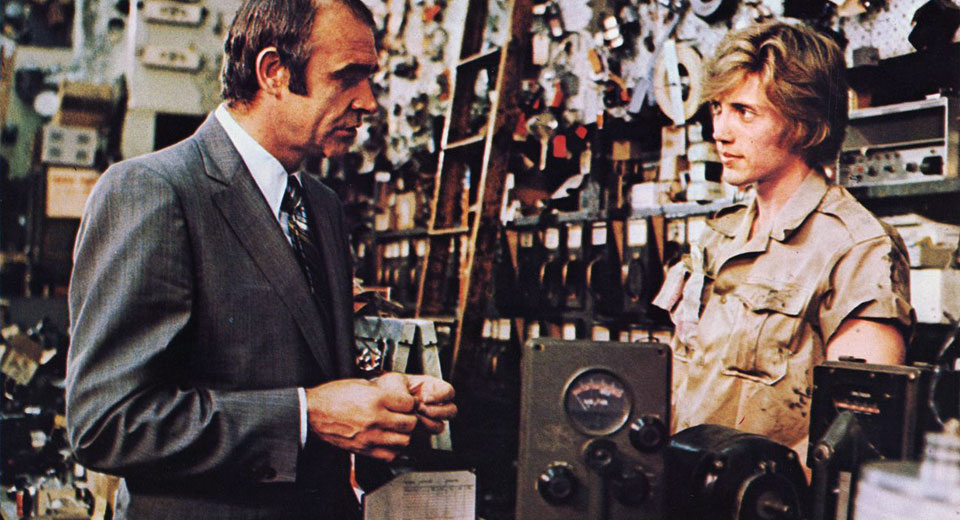 Twenty seconds into The Anderson Tapes (1971) Sean Connery compares cracking safes to raping women, his voice as giddy as it’s been before or since. In nearly every role, he is entitlement personified, a villain in hero’s clothing. He is the ultimate screen asshole, a hateful presence who unrepentantly takes what he likes and expects gratitude for the privilege of serving him. Even the most smug classic Hollywood cads (Kirk Douglas, Warren Beatty) buoyed their self-satisfaction with doubt and desire. Not so Connery, whose comic appearance in the third Indiana Jones marks the exception that proves the rule. His greatest move was retiring about a decade ago.

Sidney Lumet’s sterling direction redeems The Anderson Tapes, which is only occasionally held hostage to his star’s sociopathic mystique. Connery plays Duke Anderson, a career thief fresh out of jail and looking to knock off an entire apartment complex. Lumet’s sharp montage and cheeky mise-en-scène (pay close attention to the walls in every scene) keep the enterprise cruising forward as Anderson assembles his crew. All the while, an army of lawmen throws every surveillance geegaw in their arsenal at the gang in order to thwart the caper.

Electronic boops and whirrs serve as uncredited costar. The sounds relentlessly announce the presence of recording equipment used by an alphabet soup of G-Men. I challenge anyone to nod off during a movie this busy with shrill noises on its soundtrack. The cartoonish sound design provides an oddly endearing counterpoint to Lumet’s gruff story, benignly undercutting the film’s feigned Hawksian badassery. The film fetishizes the cutting edge surveillance equipment of its day, with its blinking buttons and sleek design, casting it as the piece’s suavest villain. Contemporary audiences can now fetishize the nostalgic tactility of the technology that today sits in every pocket, sans buttons and antennae.

The unsung hero is Christopher Walken, who, as Anderson’s tech-savvy underling, delivers an all-time zinger by intoning “America is so beautiful I want to eat it.” Gems like that, along with wide-angle closeups that could cut glass, vindicate a film lessened by its star. It’s a relief they didn’t give the line to Connery.