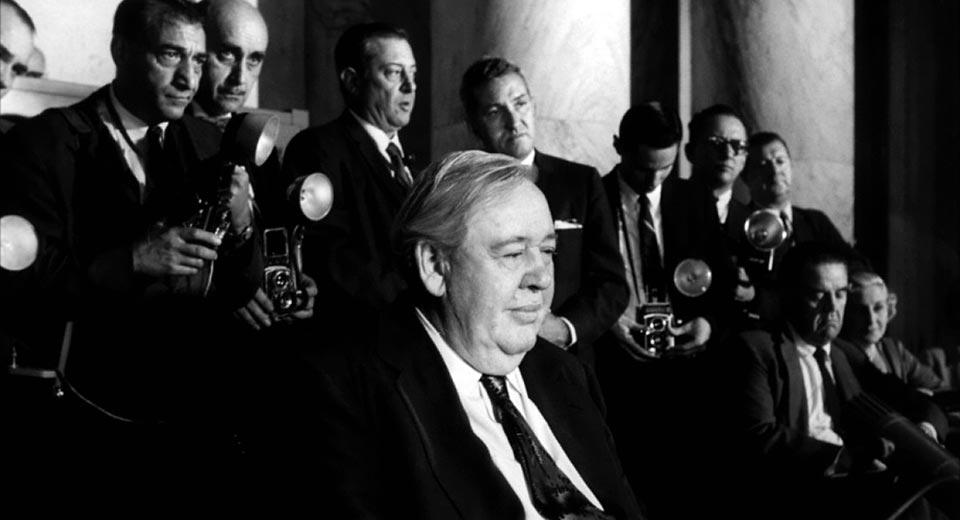 A brilliant exercise in inverse monumentalism, nothing is to be taken at face value in Otto Preminger’s Advise & Consent . Adapted from a novel by Allen Drury, it was the first Hollywood picture to address the topic of the House Un-American Activities Committee Blacklist directly in its text, Preminger having broken the blacklist by crediting Dalton Trumbo for the screenplay of Exodus two years earlier. The plot ostensibly centers on the Senate’s process for approving a nominee for Secretary of State named Robert Leffingwell (Henry Fonda), an academic whose progressive leanings are accused of masking Soviet appeasement. (The question of whether or not he loves America is queried more than once.) Leffingwell has been nominated by a dying President (Franchot Tone) to preserve his foreign policy in what characters regularly allude to as a time of international crisis; that said, the geopolitics of the situation are kept from the film’s screenplay at a wise remove.

The nominee has huge support within the Democratic Party. Majority Leader Bobby Munson (Walter Pidgeon) leads the charge to confirm Leffingwell, while an ancient, hardline Southern Democrat named Seabright “Seab” Cooley (Charles Laughton, in his final role) makes some headway in blocking him after exposing Leffingwell’s Communist run-ins as a university student decades prior. But Cooley’s witness (Burgess Meredith) is found not just to be of dubious mind, but actually announced—following a hustle within Team Leffingwell—to actually have gotten a job thanks to the nominee. In long, meticulously coordinated and powerfully omnipresent sweeps of the CinemaScope camera, Preminger soaks in the awkwardness of the Senatorial spectacle: a frail drifter, left behind by the postwar era, speaks to the marbled halls of power, received by the politicians one day as a sagacious whistleblower and dismissed as a fool the next. The hurdle begins to clear.

Almost as an afterthought, one of the peripheral characters—Senator Brigham “Brig” Anderson, a jovial-enough Democrat played by Don Murray—still refuses to back Leffingwell’s nomination. Practically overnight, the snickering insider-ism that marked Advise & Consent’s heretofore Senatorial arena vanishes; Brig’s wife begins to receive anonymous phone calls, the voice on the other end of the line threatening to expose her husband’s mysterious past with someone named “Ray”. The Senators scramble to disassociate themselves from Brig so as to keep the President’s favor, but it’s not even clear the blackmail is coming from the White House. The ensemble quality of Preminger’s verbose and wonky first half winnows itself down to a thriller both paranoid and claustrophobic, with a sweat-beaded Murray running through his options to keep cover in a very brief span of time. Hollow and cheesy scenes of Brig’s domestic life point to an existential crisis running through Preminger’s work up to this point and fully typified in Bunny Lake Is Missing, wherein affirmative societal roles (such as parenthood or marriage) are questioned from the inside out in the face of catastrophe.

Preminger elongates the disparity between smoke-filled-room realtalk and the public record to savagely barbed ends. Advise & Consent bears a running thread of fascination with political demonology and photo-op symbolism – the least disturbing instance of which might be a cameo by then-serving senator Henry “Scoop” Jackson as himself. (Peter Lawford plays a womanizing young senator at least partially modeled after his more handsome in-law, President Kennedy.) It never reaches the thrusting mania of 1964’s The Best Man, wherein Fonda was playing a Democratic candidate for President closer to the wet-eyed liberal idealist stereotype investigated in Advise & Consent’s first half—but the deconstruction only lasts insofar as Tone’s unnamed President is not, for progressive viewers, an utter cipher. Both films center their narratives on maneuvers around the imminent deaths of sitting Presidents, each modeled in their own impossibly prescient way off of FDR—a telling hallmark of pre-Vietnam liberalism.

Names, too, are important in Advise & Consent: Leffingwell’s very moniker suggests progressivism and the act of waffling, with the “well” affixed to the unmistakably evocative “Leffing” as said if in chin-stroking reconsideration. A “brig” is a floating prison wherein men have been, historically, sent by other men to live chained within inches of one another, a double entendre made all the more of a jab when it’s revealed that Anderson had a gay lover during World War II, stationed in Hawaii. (Preminger’s hallucinatory drop-in on a Greenwich Village gay bar is Advise & Consent’s obvious low point, but at least services the rest of the movie by infusing its world with hidden luridness.) “Seabright” suggests the National Anthem, typified in Laughton’s avuncular conservative windbag, who may well represent the inverse point on a DC career lifespan from the Majority Leader and President politics-wise; the film’s only real bipartisanship is elegiac. Preminger defines Washington not in platitudes or policies, but merely by what men manage to do with their brief time before it whisks them offstage.