The 36th Chamber of Shaolin 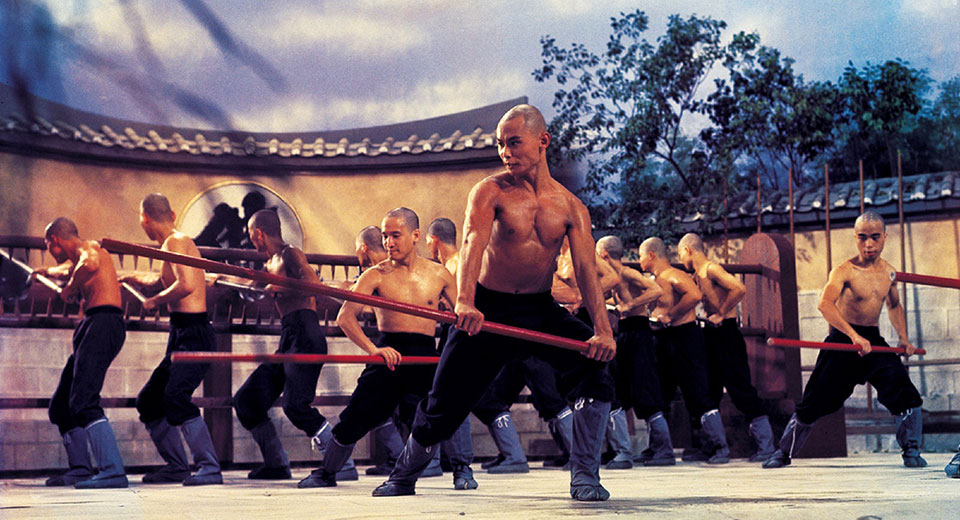 Watching a Lau Kar-Leung film in today's borderless cinematic landscape, it's easy to forget how readily the Shaw Brothers' kung-fu epics were pilloried and parodied just decades ago. Attempts to replicate the precise gestures and graceful body blows of grandmasters like Lau, Gordon Liu, and Yeun Woo-ping were an inescapable pastime in America's backyards. (Perhaps they still are? It's been a minute since I, or any of my contemporaries, attempted to land a high-kick on a pal's pimply chin.) You can chalk this casual lack of reverence up to Western tunnel vision, a knee-jerk desire to giggle at anything unfamiliar or overly formal, and the (recently rectified) dearth of suitable exhibition copies. Guileless, mouth-breathing audiences, accustomed to grindhouse prints, likely associated Hong Kong's golden age of martial arts cinema with bad dubbing and an abundance of painted eyebrows. (An exception should be made, of course, for the Wu-Tang Clan, whose self-made mythology owes much to the Shaw Brothers' extensive filmography.)

Am I implying that cinephiles are just now coming around to the profundity and elan of Shaw Brothers films? Not hardly! As New Yorkers, our palates are infinitely curious, and highbrow reverence for martial arts cinema is nothing new in these parts. To whit: the Museum of Modern Art's ten-film Lau Kar-Leung retrospective, continuing tonight with Lau's best-known work, The 36th Chamber of Shaolin. Director, star, choreographer, and son of a longstanding martial arts family, Lau (or Liu Chia-liang, depending on which credits sequence you're looking at) made the bulk of his filmography with the Shaw Brothers Studio. His own upbringing as a martial arts prodigy boasts a direct lineage from folk hero and frequent film subject Wong Fei-hung (you loved him in Dreadnaught!), and this high regard for an ancient artform is apparent in every swift kick and artfully deployed prop.

Between lavish set pieces that showcase the absolute limits of human physicality, Lau's films will frequently seed in little bits of political bristling – often, his heroes are haughty youths, caught between a corrupt government and their cool, but nurturing masters. In 36th Chamber, Lau plays this central role himself: student Liu Yude, whose thirst for revenge drives him to the monastery door of the Shaolin monks, and into a secret society built on discipline, endurance, and ass-kicking. Demonstrating his untouchable status as a triple threat within the genre, one could casually describe Lau as a wuxia Gene Kelly, a powerhouse of stamina and sophistication who brings just as much to a fight scene as he does to, say, catty exchanges between mutual enemies. Should spoiled New York audiences move heaven and earth to catch a screening on DCP of this well-known and quite-available film? If they can retire their print fetishism for a blissful hundred minutes, today's screening is the perfect opportunity to re-acquaint oneself with the absolute gold standard in martial arts filmmaking, and perhaps bring an unbeliever into the fold.