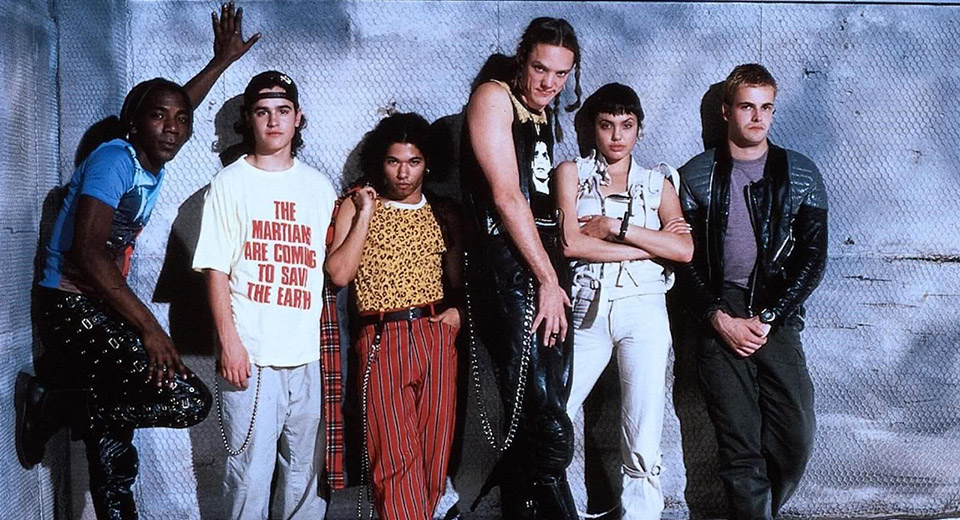 Screen Slate's series 1995: The Year the Internet Broke opens tonight at Anthology Film Archives. The lineup observes the 25th anniversary of the year that networked culture bolted into the spotlight by placing features from '95 like Hackers, Johnny Mnemonic, and Strange Days in context with media art from the 1980s to present by artists Nam June Paik, Max Almy, Faith Holland, Jon Rafman, Lynn Hershman Leeson, and Fabrice Florin. It's accompanied by a limited edition 72-page publication by Screen Slate's writers.

“The summer of 1995 will be remembered as the year Hollywood discovered the Internet,” Emmanuel Goldstein wrote in his review of The Net that year in the Autumn issue of influential hacker quarterly 2600. Although the technology underpinning the web dates to the early 60s, it was scarcely acknowledged in mainstream culture until the early 90s. In 1993, TIME Magazine put the internet on its cover with “Cyberpunk: Virtual sex, smart drugs and synthetic rock ‘n’ roll!,” a feature spotlighting the cultural ecosystem “pieced together from cybernetics (the science of communication and control theory) and punk (an antisocial rebel or hoodlum).” Explicitly linking cyberpunk to the beatniks of the 50s and hippies of the 60s, the piece waxes romantically about Mondo 2000,  William Gibson, Acid House, Negativland, and The WELL online community co-created by Stewart Brand of the Whole Earth Catalog.

A bigger media blitz occurred later with the heralding of a new government-spearheaded project. Around 1993, “Information Superhighway” was an inescapable, if somewhat inscrutable, buzz phrase. It was popularized in late 1992 by then-President-elect Bill Clinton and his Vice-President-elect Al Gore and floated as a major infrastructure investment in fiber-optics, computer networks, digital imaging, data storage, and more. Within a few months of their taking office, it seemed clearer that the Information Superhighway was basically about home shopping on your television — “How You’ll Shop, Bank, Learn, Be Entertained And More Via Interactive TV,” as Popular Mechanics put it. In many obvious respects, this is quite similar to the modern internet and the smartphone app ecosystem, which is basically an on-demand home shopping/advertising feedback loop. However, virtually all of Big Telecom’s chips were on the Information Superhighway being a TV-based system.

1995 is the year the internet broke. By that year, more than four million users were signed up to the big three dial-up online service providers: CompuServe (the oldest), Prodigy (the most family-oriented), and America Online (the one that soon majorly eclipsed the others before spectacularly crashing). That year TIME devoted an entire special issue to “cyberspace.” Notorious fugitive “cyber criminal” Kevin Mitnick’s February arrest dominated headlines. Publications like HotWired, Pathfinder, Salon, and Suck began to develop models for online editorial content. Fledgling search engines helped users discover web pages. And perhaps most significantly, Netscape Navigator catapulted the world wide web into the mainstream, achieved a spectacular IPO that precipitated the dot-com boom, and drew the ire of Bill Gates, whose own Internet Explorer and Windows 95 launch that year instigated the Browser Wars — and eventually triggered an antitrust lawsuit from the Clinton Justice Department.

Cinema’s relationship to networked culture follows a similar trajectory, with relatively little cultural representation – most notably 1983’s WarGames — until a torrent of networked features hit the screen all at once. The six features included in 1995: The Year the Internet Broke advance the argument that 25 years ago wired culture came to a head, busting into the popular consciousness while also cresting into a more mainstream, controlled, commerce-friendly direction. Much as Hollywood once valorized the Wild West, it was now pursuing a new kind of Manifest Destiny across the superhighway at breakneck speed. Instead of their parents’ “Hi-yo, Silver!”, the young generation had a new rallying cry: “HACK THE PLANET.” We hope you'll join us at Anthology as we salute these pioneering console cowboys.