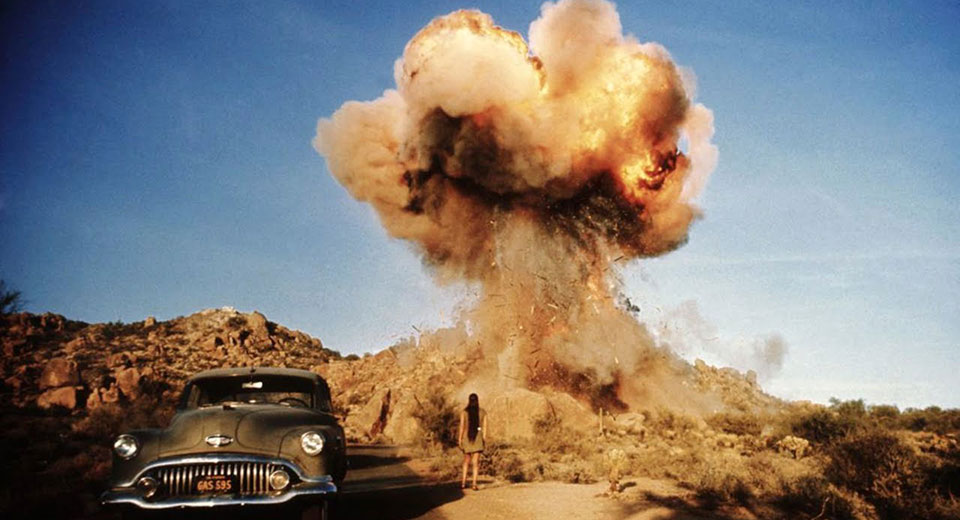 A notorious box office bomb, Zabriskie Point was not well received on its release in 1970. “Slugged by the critics,” in the words of Manny Farber, it was described as a “pathetic mess,” “a movie of stunning superficiality,” and worse by critics such as Pauline Kael, Roger Ebert, and Vincent Canby. Farber was one of the few critics to recognize at the time the “photographic lyricism” of this film, “never meant to be taken as a realistic portrait of America.” Indeed, like many Michaelangelo Antonioni films, Zabriskie Point is a dramatic exploration of landscape, not much of a departure from L’avventura or Red Desert – only this time with Pink Floyd and the Grateful Dead on the soundtrack. Somehow its American counterculture setting left critics and audiences expecting cinema-vérité realism and not an Antonioni film.

Its poor reception would lead Antonioni to defend his film to the New York Times, arguing “a film is not a social analysis, after all. I was just trying to feel something about America, to gain some intuition,” and noting that as a foreigner perhaps it is too easy for critics to disregard his impressions of America, even though they may be illuminating precisely because they are from the vantage point of a foreigner. With the passage of time, Zabriskie Point seems more and more to have captured something essential in the qualities and contradictions of America circa 1970. To my mind, it has aged far better than Blow-Up, a film lauded at the time for capturing the zeitgeist of mid-sixties “Swinging London” (a “mod masterpiece,” according to Andrew Sarris). Zabriskie Point is not just a depiction of the American counterculture, but an alluring, if menacing, vision of a distinctly American landscape from the badlands of its desert site to a capitalist surveillance and police state embedded in the LA landscape. (Antonioni would have his own experiences with surveillance and policing during the filming of Zabriskie Point as he and his film shoot were monitored and hassled by the FBI, the Justice Department, and the Oakland County Sheriff.)

Beginning as it does, in a college classroom packed with student radicals and Black Panthers – Kathleen Cleaver among them – perhaps audiences can be forgiven for initially expecting something approaching a documentary about the late sixties counterculture. The narrative is then set in motion by a violent clash between student radicals and the police and the shooting of an unarmed black student by one of the cops – the first of many “intuitions” into the American landscape which perhaps show Antonioni to be ahead of his critics, or at least able to see certain features of the country more plainly.

From here, we will spend much of the rest of the movie in the company of two members of differing sides of the counterculture, one of the white student radicals, Mark, and the much less radical, more hippie-ish Daria. Antonioni cast non-actors Mark Frechette and Daria Halprin in the roles, and from late 1969 through 1970 the two would be the stars of a publicity campaign landing them on the covers of Rolling Stone and Vogue, and on various talk shows (including a famously loopy appearance on “The Dick Cavett Show” with Mel Brooks and Rex Reed). Like much of the publicity surrounding Zabriskie Point this could only have furthered misapprehensions about the new movie.

Halprin was cast by Antonioni after he saw her in a documentary about San Francisco hippies. Frechette, meant to be “an American Che Guevara,” was discovered at a bus stop, in the midst of a violent shouting match. (Previously, at auditions for the part, hopefuls were given the line “fuck you” to read.) Frechette was not exactly Che Guevara or Bill Ayers. He would tithe his earnings from Zabriskie Point to the Fort Hill Community, the commune/cult run by Mel Lyman and described in Rolling Stone as the exemplification of “acid fascism.” Halprin would for a time join the Lyman commune as well, but would eventually flee the apocalyptic cult in which 13- and 14-year-old girls were wedded to adult men. Frechette would die in prison at 27, after robbing a bank at gunpoint in protest of Watergate. (“We just wanted to hold up Nixon. The bank was the nearest thing that was federally insured.”) It is this strange, irreconcilable, hostile America – not the one promised by the magazine and soundtrack album cover photographs of Halprin and Frechette used to market the film – that Antonioni gives us in Zabriskie Point.