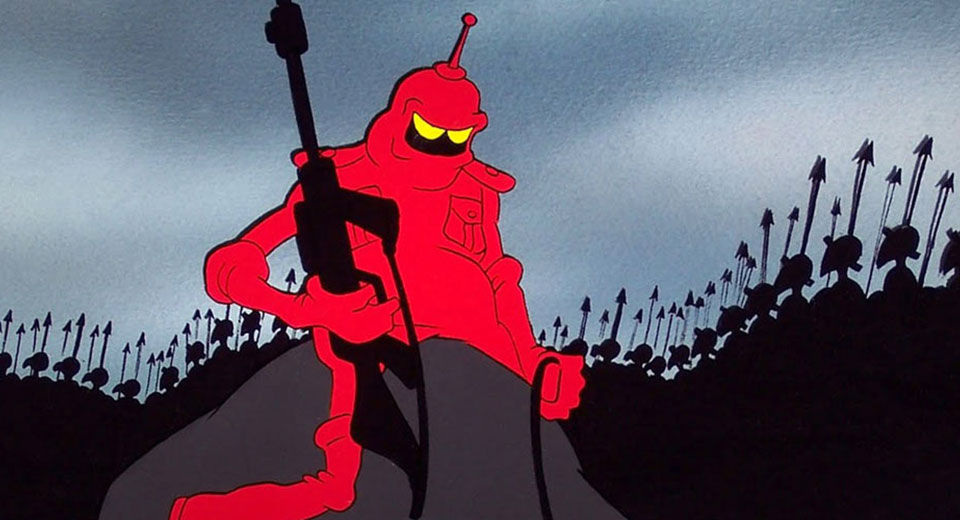 By the time Ralph Bakshi wrote and directed the 1977 animated feature Wizards, he had earned quite the reputation as a ribald satirist of so-called Flower Power. In films like Fritz the Cat and Heavy Traffic, Bakshi used a fresh spin on classic ink-and-paint techniques—rotoscoping, live-action backgrounds, and musical cues—to expose, ridicule, and somehow celebrate free love, free speech, and free-wheeling drug use.

With Wizards, Bakshi’s oeuvre of adult animated epics reached a new level of sophistication. Though populated by fairies, elves, and mutant humans, Wizards contains, beneath its fantastical surface, a cogent sermon about our (seemingly never-ending) era of nuclear anxiety. The post-apocalyptic allegory centers around a pair of feuding twins: Avatar, a good magician who derives strength from the Natural world (sound familiar?), and Blackwolf, a charismatic tyrant whose power is rooted in destruction and hatred.

Each presides over their own respective realm, and Bakshi is not shy about where he draws his parallels. Avatar’s is a peaceable kingdom, where cherubic townsfolk frolic in the half-nude, casting fun spells and living in friendly symbiosis. Blackwolf’s domain is more familiar: a wasteland of barbed wire, pollution, tightly-packed slums, and decay. There, the latter rules with an iron fist, plotting the destruction and colonization of his neighboring nation-states. When Blackwolf discovers the power of propaganda, he galvanizes a new army of unstoppable baddies, threatening a delicate harmony that long separated the forces of darkness and light.

Sweeping stories about the eternal struggle between good and evil seem especially plentiful these days—whether deliberate or sheer coincidence is anybody’s guess. The only certainty is that wherever humans—or humanoid mutants, or elves, or whatever—continue to fight brother against brother, suffering will follow. The higher-than-high stakes of Wizards have their equals in our own world, where mistrust and “disruption” pose an ever-pressing threat to the better angels of our nature. A kinetic cornucopia of 20th-century fears and fiends, Bakshi’s Wizards is at once a warning and a prophecy, too beautiful to ignore and too powerful to forget.