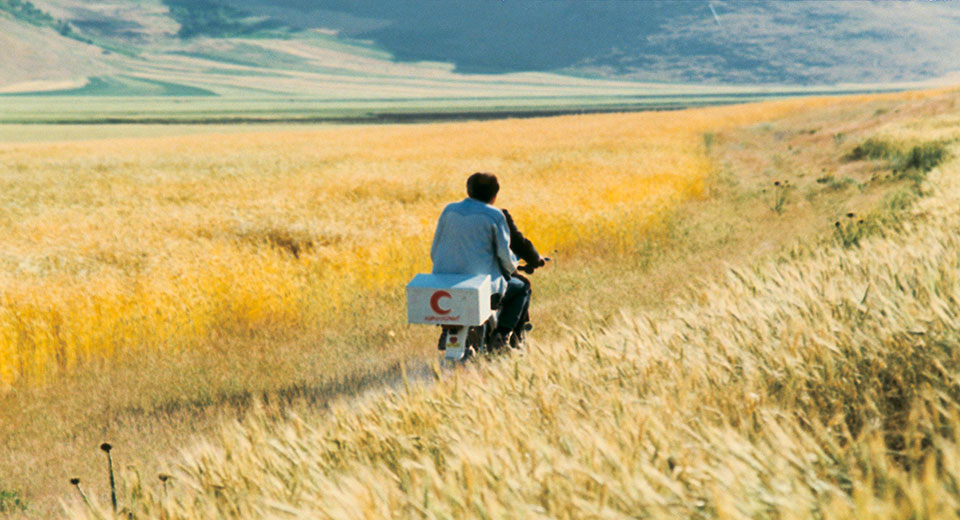 Brian Raftery recently made the case that 1999 was the best movie year ever, but his book – pithily titled Best. Movie. Year. Ever. – doesn't discuss Abbas Kiarostami's lyrical opus The Wind Will Carry Us. Admittedly Raftery focuses almost entirely on Hollywood productions, but considering that at the cusp of the new millennium Kiarostami was hailed as "the man who owned the Nineties" (Kent Jones), his understated 1999 banger might have merited mention.

The Wind Will Carry Us is like The Castle set in an Iranian mountain village. A small TV crew shows up to cover the archaic but allegedly fascinating funeral ritual of an elderly woman at death's door, but the woman clings to life and the crew is doomed to wait indefinitely. Our protagonist (addressed by the villagers as Engineer, a moniker that becomes increasingly ironic as he languishes taskless for days on end) is the only member of the crew that we ever see, Kiarostami having chosen to consign the other members to the offscreen space in order to "see how much we can do without actually showing it." As the project continues to stall and the Engineer has nothing to do but kill time by drifting through the village with a twelve-year old named Farzad, the film turns into a sustained meditation on work and idleness.

Work is indeed the major theme, represented chiefly as an absence: the Engineer's forced leisure and his anxiousness to make himself useful, the laborer who stays out of sight in the ditch he's digging, and the village youths who allegedly work three months out of the year and spend the rest of their time "sitting around drinking tea." A middle-aged husband and wife argue about the difference between women's and men's labor. "Serving tea to you isn't work?" she demands, then makes the case that women in this society have three trades: "By day they're laborers, in the evening they serve, and at night they work," i.e. a graveyard shift as a sex object for their spouses. Her husband finds this slanderous, and insists that marriage is a third job for men as well. Like the Engineer, with his neurotic noncommittal shrugs, Kiarostami declines to take a position.

Kiarostami insists that cinema is an artform on a par with music and sculpture, but the way in which he achieves a degree of abstraction is more akin to poetry, using his camera to allude rather than to denote. "I feel the cinema that will last longer is the poetic cinema, not the cinema that is just storytelling," he told David Sterritt in 2000. Sure enough, the only function served by the narrative of The Wind Will Carry Us is to provide a frame for the Engineer's meanderings and ludic observations, the pleasure he takes in chance encounters, and the obscure motivations behind things he seems to do mostly out of boredom, like kicking a turtle onto its back and leaving it to bake to death in the sun. And poetry is not only a formal principle but also a theme and a narrative device, as the Engineer relates to many of the villagers by quoting lines by modern Iranian poets like Forough Farrokhzad.

Kiarostami's Engineer is like Kafka's surveyor but with distinctly 90s sartorial proclivities. Next time you're on a 102-degree J train platform in your big open flannel shirt and there's an 18-minute wait, pretend you're the Engineer and try to appreciate the minutiae of your surroundings. Anyone dependent on the MTA could probably use a lesson in patience.