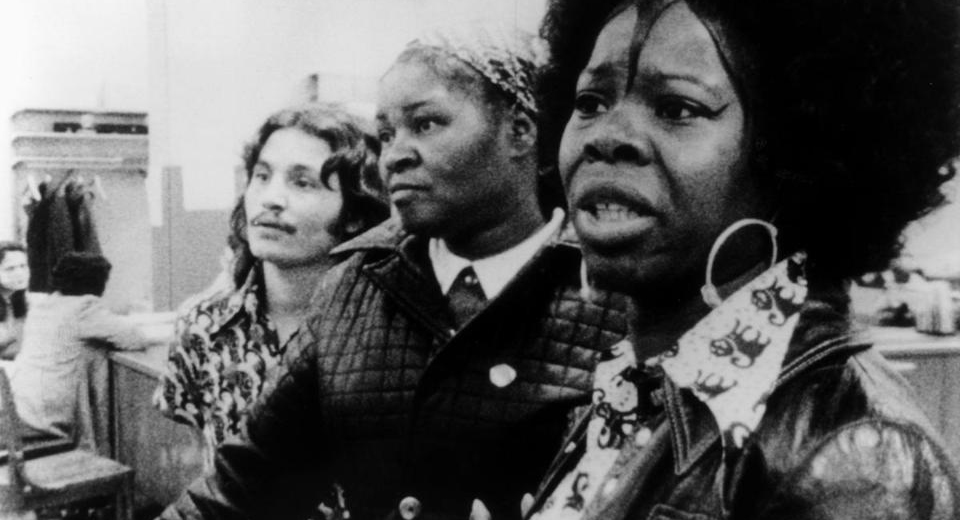 Welfare (1975) is a sprawling film. Although spatially just as limited as Titicut Follies, High School, and Hospital, it deals with such a vast number of agencies, offices, legal issues, and questions of responsibility that it ceases to be a report on a single institution and becomes an encyclopedia of society’s problems and the quandaries of mortals.

Over the course of its 167 minutes, we see dozens—if not hundreds—of people in the Waverly Welfare Center simply being: staring into space, dozing off, playing with babies, reading the Daily News, drawing. This is punctuated by verbal battles between “clients” and social workers: an Apache from Oklahoma denounces his concentration camp-like reservation; a young mother complains about the rats and gas leaks in her apartment; one paranoiac rants about his brother-in-law John D. Rockefeller while another accuses Abraham Lincoln of draft-dodging. Many are driven to appealing to some baseline of human rights: in speech peppered with ‘oders’ and unds’ a German immigrant says he should be able to “live like a decent human being” because he thinks “this country is still a good country,” while a Jewish self-proclaimed psychic researcher declares, “I’ve been waiting for 127 days. Waiting for what? For Godot? I’ve been waiting for something that isn’t coming: for justice, for equity.”

These poor souls (and most of them are poor—as the psychic points out, “There’s nothing in the middle anymore, only those who have and those who don’t”) are shuttled from one place to another: from the Social Security Administration to the New York Welfare Department, from the Buildings Inspector to the Employment Section, from the courts to a narcotics program, from their most recent employer to their doctor, from their sister’s apartment to their uncle’s house. They suffer from tumors, hernias, fractured skulls, and diabetes, yet most of them are amazingly patient and stoical (with a couple of volcanic exceptions).

The really magical thing about Welfare is that Frederick Wiseman has managed to make one of the most boring routine experiences of non-wealthy Americans (with only the dreaded DMV topping it in proverbiality) such a rich source of moral and emotional education, to reveal the numbingly ordinary as fascinating. He reminds us that boredom is a choice. When we’re trapped in situations that feel like meaningless wastes of time, we simply have to hone our attention and we’ll see and hear things we’ve never seen or heard before—and never will again. No moment is a repetition of another; when we remind ourselves of this, the seeming vacuum of the world recedes and reveals its infinite richness.

Just to end on a critical note: many of the clients come off as terminally lazy and good-for-nothing, offering rhetorical ammo to those who claim that poverty is a choice and that cutting public assistance programs will give Americans their spines back. The more stories we hear about claimants missing their appointments because they were “sorta depressed,” the more wind this ruthless individualism gets in its sails.

Also, regarding the post-‘68 black NYPD officers with their afroes and heightened consciousness who patrol the office—what does their “Blue Power” sticker mean? Is it a dissident group within the department, or just an early form of Blue Lives Matter?