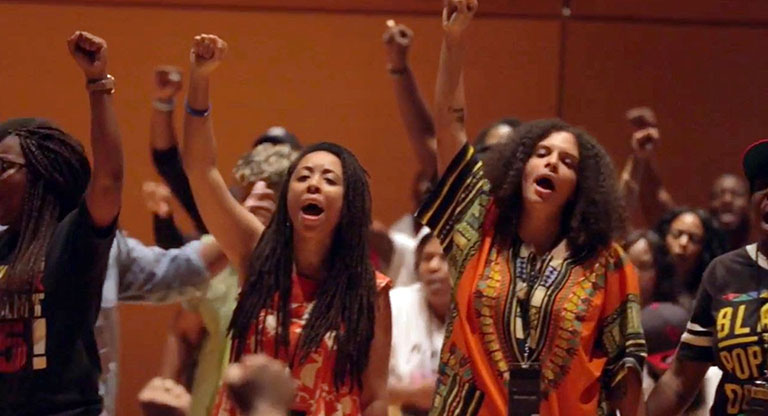 There are, in fact, films and videos that make good on the democratizing promise of their media. Moving image technology may never manage to outpace the market, which has expanded to subsume each of its iterations, but it can at least deliver tools to communities that desperately need them. It can allow for a record of events that might otherwise have been forgotten and can provide a weapon in struggles that might otherwise have been lost without a contest. ”We Tell: Fifty Years of Participatory Community Media” is a traveling program of short-form documentaries that exemplify such possibilities of moving image work in this country. It visits Anthology Film Archives this weekend.

The series opens with a castile soap salesman promising "the sweetest dreams that ever was" and ends on a picket line among fast food workers demanding an end to sexual harassment. In between, we bear witness to a thousand proofs of life in the face of hardship and dispossession. A needle exchange is operated out of a winnebago in Philadelphia. A water protector shares footage of police brutality at Standing Rock. An action painting is composed by use of a wheelchair. A group of women in New Orleans offers others a way out of abusive relationships. Conscientious objectors face court martial rather than fight in a war of foreign aggression. A new father introduces his child to his chosen family on the streets of San Francisco's Tenderloin. The Black Panthers exercise the rights afforded them by “the jive Constitution of the so-called United States.”

"We Tell" allows a vast range of material to weave dense patterns of relation over space and time. Its six loosely thematic programs, each organized chronologically, mark one path through the 35 videos, but others are possible. For instance, tonight's "Body Publics" includes HSA Strike ‘75 (Kartemquin Films, 1975), an account of a physician's strike at a Chicago hospital, which connected the interests of the doctors with those of their patients and fought for both – a strategy taken up again in the same city by this year's teacher's strike. Tuesday's "Wages of Work" features Plena is Work, Plena is Song (Pedro Rivera & Susan Zeig, 1989), a paean to a Puerto Rican musical tradition that "tells stories the newspapers don't print." That video might otherwise have shown on Saturday in "Collaborative Knowledges," which itself includes Seeds of Awakening: The Early Nation of Islam in Philadelphia (New Africa Center et al., 2011), a retelling of the early days of the church by some of its founding members that could easily have played later that night, in "Environments of Race and Place."

That each piece seems to acknowledge and anticipate the others is a testament to the care with which the series was programmed, but also to the intersections and alliances inherent to the politics on view. There are no single-issue documentaries here. Each moves quickly and forcefully to connect the various facets of its primary subject to broader discourses, seeking the solidarity in which popular power resides. Hardly any of the works bear the names of single authors. More often, collectives are credited with production, sometimes leaving their phone numbers and URLs at the end for those who wish to get involved. The Appalachian Film Workshop is well represented, as are Third World Newsreel, Paper Tiger Television, and Philadelphia's Scribe Video Center, of which the series' co-curator, Louis Massiah, is the founding director.

Throughout the series, so-called "expert" testimonials find their place among those of people in the affected communities, whose own expertise is appropriately weighted. There is a sense of trust between subject and maker that is rare to the documentary form. When the producers occasionally turn their cameras on themselves, we see that they are very much like the people they intend to photograph. As members of the community, and not merely spectators, they have an investment in the project itself, as well as its representation.

The work is fast-paced as a matter of course: there is little time and much to do. The videos often give the impression of having been made and released as quickly as possible, which makes for an exhilarating viewing experience. Until recently, many of these works may not have enjoyed the benefits of a polite, patient audience in a cinema. Rather, they made their case to those who might have been watching over the din of other conversation, perhaps at a community center or a union hall, or – in the case of the public access works – to those who were only channel-surfing.

This is not to say that any of these pieces is without art and grace. Besides the charm of their sometimes uneven, purpose-built aesthetics, there is also the tendency of social practice documentaries to smuggle in impressionistic gestures, accusations of sentimentalism or absurdity be damned. An elegant montage sequence of Wataridori: Birds of Passage (Visual Communications, 1974) presents a Japanese-American widow painting the landscapes of her memory. Ambitious camerawork in Voices from a Steeltown (Tony Buba, 1983) allows for interviews with a dentist while his hands are inside a patient's mouth, with a butcher as he defeathers a chicken, and with a recently-unemployed steelworker who must now panhandle. Even the quick and dirty special effects of Sit: Must You Pay the Rent? (New Orleans Video Access, 1975) pack a punch: a woman is teleported from an argument with the landlord on her porch into the office of a tenant coalition.

It is not exactly a commendation of our political process that while some of the older work no longer looks contemporary, its relevance and urgency have remained intact. Still, it is useful to connect our own moment with the hidden episodes of history. When we do, we find that people tend to understand well the root of their problems and will work assiduously toward solutions. An epidemic is left in the hands of its victims in Testing the Limits (Testing the Limits Collective, 1987), so people with AIDS form their own research commissions in the void left by the medical establishment. Confronted with the quickly eroding banks of the river next to his family's home, a 16-year-old Inuit boy becomes a climate activist in Stories of TRUST: Calling for Climate Recovery: TRUST Alaska (WITNESS, 2011). When the Pittston Coal Company denies responsibility for a devastating dam collapse in The Buffalo Creek Flood: An Act of Man (Appalshop, 1975), the survivors investigate, publish their findings, and interrupt the next stockholder's meetings with demands for reparations.

Having watched the entire series at quite a clip, I can faithfully report that the six-day, seven-program marathon viewing experience on offer has none of the miserable burn-out effect you might imagine. Just the opposite: it is singularly energizing to witness the tenacity of the social spirit at such scale, to acknowledge those who have risen to the occasion of our common crisis: organizing, agitating, educating, and documenting. This holiday season, do yourself a favor and fall in love with humanity again.