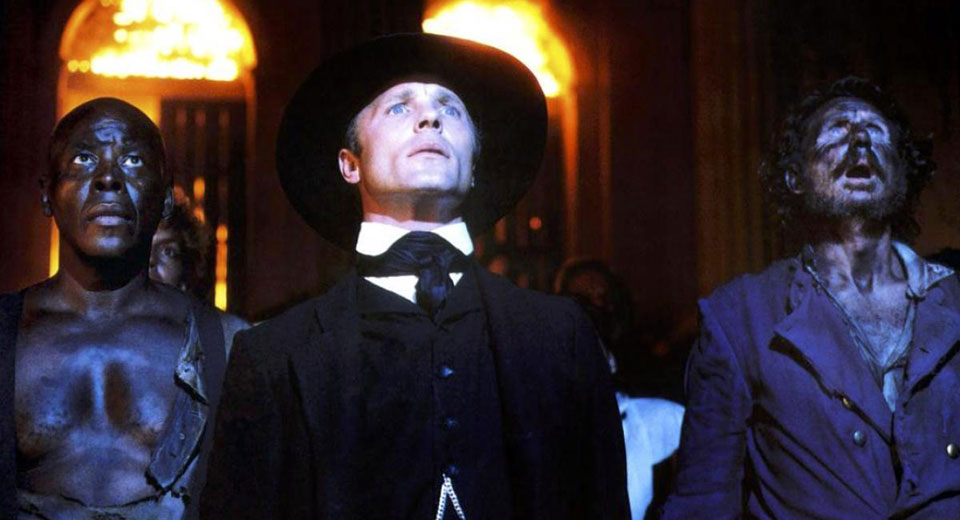 William Walker is a historical footnote: an underweight prude who nevertheless became a doctor, lawyer, and publisher, and conquered Nicaragua by force in 1856. Walker was soon executed in Honduras prior to the American Civil War, and therefore the fictional territory of the western genre as we know it. But punk director Alex Cox (Repo Man, Sid & Nancy) and existential screenwriter Rudy Wurlitzer (Two Lane Blacktop, Pat Garret and Billy the Kid) decided to tell the story of Walker’s military filibuster as a masterful Hollywood western.

Walker was shot in Nicaragua in 1986 as a political statement of support for the Sandinista cause and filled with of-the-moment anachronisms that could make Godard blush. Political filmmaking always has the chance of becoming quickly dated, doubly so a movie that was barely released. Cox torpedoed his career by making Walker, never working for an American studio again. Ed Harris, with a smile and caring eyes, cheerily executes his own men, eats human flesh, and institutes slavery, all against his own stated goals. He is a true hypocrite with no knowledge of how he contradicts himself.

Cox is an expert on the Italian Western (authoring a history of the genre in 10,000 Ways to Die), but the film is indebted to the cinema of Sam Peckinpah. All the minor characters feel as if they’ve wandered in from The Ballad of Cable Hogue, down to Walker’s carpetbagger brothers who show up when the fighting is done to swindle the locals (Gerrit Graham, William O’Leary). The difference is that sentimental undercurrent in Peckinpah’s work has been drained away. There is no tragedy to Walker or his men (Sy Richardson, Rene Auberjonois, Xander Berkley), only the beautiful place they’re decimating. The final third of the film — set in a burning Granada — feels like a world where Bloody Sam hated America and everything it ever stood for and cast it into perdition.

Walker is an angry film, but never incoherent. The minor key score by Joe Strummer and rich cinematography by David Bridges make this Cox’s only film that feels gargantuan in scope. In a speech Harris improvised, Walker blithely tells the locals that “It is our destiny to be here. It is our destiny to control you people.” It’s haunting. It’s every intervention of America’s enormous military weight thrown at the people of Nicaragua, Iraq, Korea, Laos, any country we can scapegoat and transform into a meat grinder.