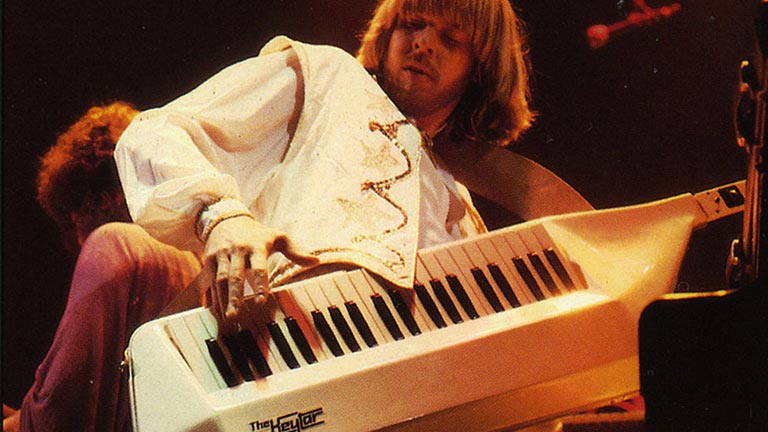 Stoners of the Five Boroughs, rejoice: it has truly been a banner year for us red-eyed monsters. Between Governor Cuomo's tentative nudge toward legalization and Hizzoner's clumsy attempts to follow suit, you'd think well-fed ganja-freaks across our fair city were suddenly some kind of voting bloc, as worthy of courtship as a trade union or midwestern gun club.

To paraphrase Cole Porter, "everything lame is cool again," and the reexamination of habitual marijuana usage has, like a dank rising tide, lifted countless subcultural boats. A casual scroll through Instagram reveals streetwear wannabes and minor celebs dressed to the hilt in Grateful Dead paraphernalia. We're, at most, a good six months out from sincere think pieces about "Woodstock '99 nostalgia." Even tie-dye, spotted on runways from Barcelona to Beijing, got a shoutout in that most venerable broadsheet, The Wall Street Journal.

Before you make with the gnashing of teeth and rending of garments, take comfort: apres hippies, la deluge, and so we must look ever-forward. When the jet-set tires of drug rugs and Tevas, which micro-moment from the too-short 20th century will fill the void? My trend thermometer foresees a noble compromise on the horizon, something that splits the difference between tech's hack-a-thons and fashion's bong rips: the extremely heady, yet still profoundly dorky sounds of progressive rock.

Born in Canterbury during England's first (and, by all accounts, less exciting) Summer of Love, nursed on a steady diet of faux-Pagan mythology and potent psychedelics, and cross-pollinated with electronic instruments from the labs of West Germany, "prog" was predestined to be the domain of druggies and dorks. It would be unthinkable today for a hip young thing to turn up their nose at "electronic music," but in a less enlightened time (the 1970s) those gadgets and doo-dads and lyrics about time travel signalled a death knell for rock 'n roll's domineering machismo.

Tastes change, thankfully, and those square sounds of yesteryear have started to look avant garde in hindsight. This summer brought the sleeper-success of Panos Cosmatos' Mandy, a psychedelic, blood-spattered Nic Cage vehicle that earned considerable attention for its prog-heavy soundtrack and gatefold LP-ready poster art. Libertarian journalist David Weigel's popular history of the genre, The Show That Never Ends, may not have cracked the New York Times' best-seller list, but its trippy cover earned a rightful place on the paper's "Best Book Covers of 2017." When – and it is a "when" – marijuana prohibition is finally, sensibly repealed, the Korg-aissance will begin in earnest.

So-called "forecasters" will fall over themselves claiming retroactive credit for connecting prog's sudden ubiquity with a nationwide sparking up. But the adventurous cinephile with any sense, or taste, will already be light years ahead, soaking in the sound bath that is this month's "Wakemania!" series at Alamo Drafthouse Brooklyn. The far-out and finely-sourced survey of venerable progfather and Yes keyboardist Rick Wakeman's film scores is a side of deep cuts, test-pressed for the city's realest heads – lightweights need not apply. Have you prepared your brain for the transmission it is about to receive? 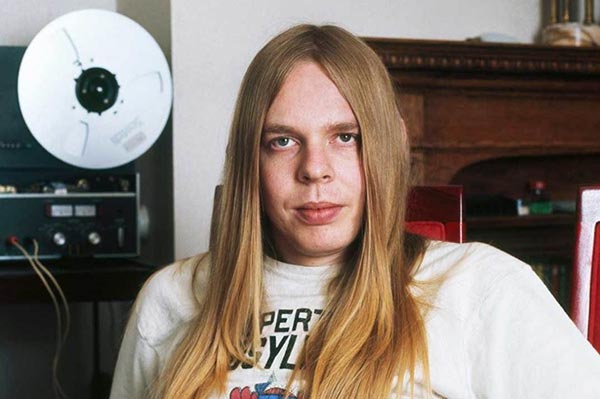 "Released as a double bill," according to the series copy, "with Genesis: Live in Concert," the Olympic film White Rock, shot at the 1976 Innsbruck Winter Games, has an especially vibey modernism; sort of a ripened Space Age-aesthetic in earth tones. The token grammar of sports photography – split screens, slower shutter speeds – gets a second wind from newer and lighter equipment, and the results are unapologetically stimulating. While the crisp, rhythmic editing and angular bodies of ski jumpers, bobsledders, and figure skaters evokes Arnold Fanck's pre-war mountain films, the expansive score is what really elevates this morsel of brain candy into the realm of the sublime.

Wakeman has always enjoyed a bit of ecclesiastical pomp – from his boyhood turn as a local church organist to his penchant for Popish robes – and this tapestry of choral song and oscillating sine waves is the perfect soundscape for the secular cathedral of the Olympic arena. Narrator James Coburn lustily refers to the Winter Games as, "the most dramatic and exciting championship on the the whole spectrum of sport" – here the swooshing suspense of every bank turn, the delicate slice of every triple axel, melds seamlessly into Wakeman's baroque palette. Gazing up from the pinnacle of the Tyrolean Alps, one could conceivably tilt the eyes a little higher and glimpse the face of God.

By the 1980s, synth-based horror soundtracks were fairly well-worn territory, but Wakeman's work on the 1981 low budget summer camp slasher The Burning is a standalone among pale imitators and ineffective also-rans. The anxiety-inducing score brings that same soaring tendency of White Rock down from the mountain to the valley below – without it, you would be merely creeped out, hardly shaken to your core. Borrowing Staten Island's local Cropsey legend for a bit of cabin folklore, the early Miramax release is certainly the kind of film you've seen before: there's a prank gone horribly awry, an unfortunate victim wrested from the jaws of death by a thirst for vengeance, and countless pairs of free-range naturals. 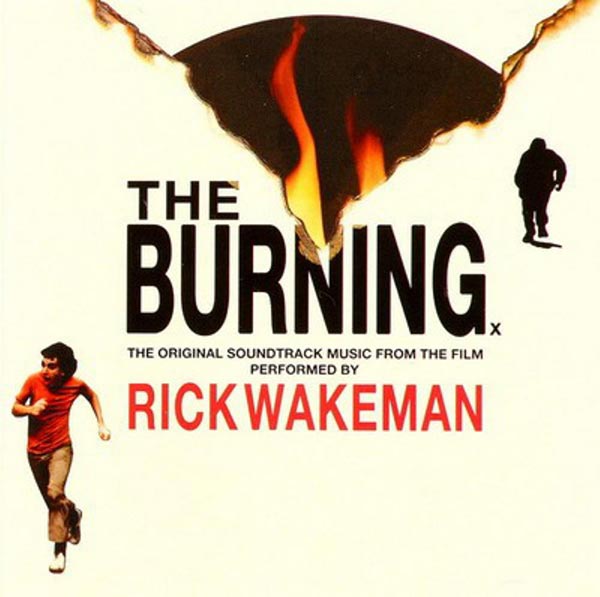 What sets The Burning apart is the level of atmosphere and technique applied to those otherwise familiar moments: the killer's dewy, gauzy P.O.V., thunderclaps and beating hearts on the soundtrack, and above all Wakeman's resonant score. It's a relatively mainstream effort, but far from commonplace. The whole aural array is unusually deep, as if emanating from a hellmouth above the bowels of the earth. Keyboard trills and theremin-esque explorations nag and gnaw at the viewer, whipping one's lizard brain into a sentient, blood-stained froth aching to drown out the noise within. Watching a motley crew of hormone-soaked innocents drop like flies – is this not the genre's raison d'etre? The titular "burning" refers, on the surface, to that aforementioned abortive prank, but perhaps a slow and ominous simmer would be more appropriate, although it doesn't quite have the same ring.

These iconic scores run a narrative and aesthetic gamut; scaling the highest peaks of transcendence, fathoming the deepest crevices of disquietude or, at their most potent, veering wildly between the two. Lisztomania, the first of two collaborations with director and professional hedonist Ken Russell, proved definitively that the progressive kapellmeister could go toe-to-toe with his classical forebears. Dragging formal polyphony out of the academy and into the smoke-filled recording booths of London's Island Studios, Wakeman built a shiny new madhouse on the foundational melodies of classical music. 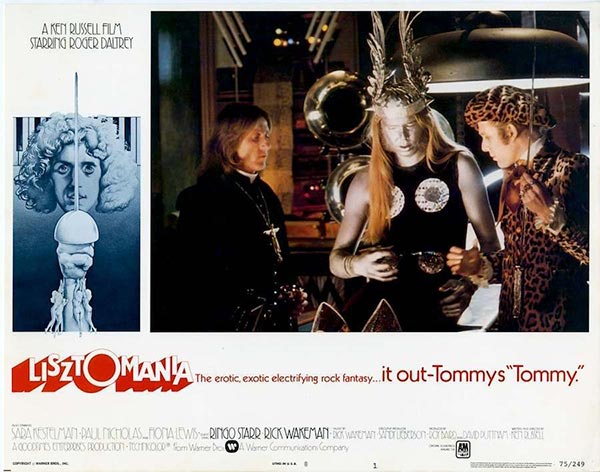 Starring The Who frontman Roger Daltrey as Hungarian composer Franz Liszt, portrayed here as a kind of early pop idol, Russell's film is a decadent and cheeky comment on modern celebrity that interrogates the notion of "God-given" talent and satirizes the false delineation between public and private lives. Prog rock's cherry-picking approach to Western folklore has a perfect cinematic counterpart in this loopy saga, which wantonly pairs real-life legends Richard Wagner and Hector Berlioz with cameos from a Nietzschean "Superman" and Norse thunder god Thor (played by Wakeman himself). The signature Russell marriage between arch political commentary and grotesque bodily slapstick is buoyed by Wakeman's arrangements of universally-beloved Liszt melodies and supplemented by rock-opera worthy lyrics courtesy of the director and his feather-haired leading man.

The highlight of this regrettably brief series, however, is Wakeman and Russell's second outing, Crimes of Passion, a gory psycho-sexual thriller starring bombshell Kathleen Turner as a couturier who moonlights as an icy call girl. Screening on a 35mm print from the Academy Film Archive, the rare and unmissable director's cut holds a well-earned top slot within Russell's crowded wunderkammer of human depravity. Anthony Perkins delivers one of his finest late career performances as a street corner preacher with, shall we say, unusual proclivities, and Turner's conflicted portrayal of a lonesome degenerate caught between perversity and respectability avoids that tiresome Madonna/whore dynamic altogether.

Wakeman pulled a double shift in 1984, channeling the mystic imagery absent from his Crimes score into a more fantastical production that borders on the absurd. Loosely based on H. Rider Haggard's Victorian adventure novel She, this eponymous adaptation combines the best of low budget fantasy epics with peak Cold War nuclear anxiety, setting the unavoidable "hero's journey" in a post-apocalyptic wasteland controlled by overdressed mutants.

Twenty years after an event called "the Cancellation" (civilization is just bad TV, apparently), our once-great society is overrun by warlords in Medieval drag, who pillage villages for spare toaster parts and boxes of Cheerios.

Flimsy premise notwithstanding, this gladiatorial goose chase more than succeeds as a vehicle for stunt woman and star Sandahl Bergman – a go-to for strength and grace during the 1980s' boomlet of sword-and-sandal pictures. Topless, fearless, and bronzed, her martial artistry rescues both our heroes and attention spans from what could have otherwise been a half-baked exercise in adventure filmmaking. 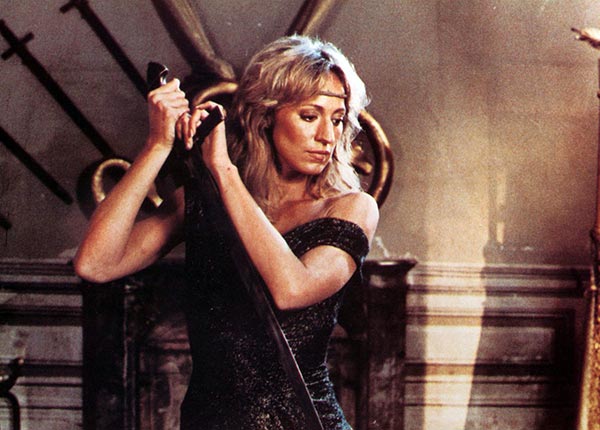 Sharing this burden is, of course, is Wakeman himself, evidenced by the maestro's post-prog turn toward an arena rock sound that dovetails neatly with the film's aesthetic and narrative hodgepodge. She is the kind of "totally '80s" time capsule that will likely inspire "knowing," "ironic" laughter from any paying audience, but if you're inclined to view this curio through sufficient haze there is great pleasure in store. And Wakeman's full-tilt into dorm room wizard territory, outlandish though it may be, is no joke: loaded front to back with original music cues, the score is a sonic banquet of battle cries and chivalric leitmotifs.

Seeing it "big" has always been the official Screen Slate preference, but it's the multi-sensory appeal of "Wakemania!" that makes this short-but-sweet series such a standout. Progressive rock is an audiophile's genre, emerging as it did during a great leap forward in home listening technology. And Wakeman's earliest turn as a film composer, Lisztomania, owns a little slice of this history as the first film produced with Dolby's then-new optical Stereo soundtrack, making his unusual oeuvre the perfect meeting ground between Hi-Fi snobs and rep rats.

After decades of purist rock-shaming and largely ineffective anti-drug messaging, it's high time these mind-expanding scores received their proper acknowledgement. Wakeman's compositions seldom – if ever – made the jump from the living room stereo to the DJ booth, and perhaps it is this inherent sonic solipsism that has kept him from attaining the cool points of continental contemporaries like Giorgio Moroder or Vangelis. If disco and dance music has its analog in public moviegoing, prog is decidedly home video: a largely solitary listening experience, best enjoyed through a single pair of expensive headphones.

For those of you who routinely trod the greenway of good times, "Wakemania!" is your chance to put down the bong, wrest yourself from the warm embrace of your couch groove, and pay homage to this patron saint of power chords. Even abstemious cinephiles will leave feeling, shall we say, elevated – just a little dab'll do ya. With an idiosyncratic filmography now ripe for reappraisal, a new generation of midnight tokers must heed the call to worship at the crystal-and-shake laden altar of prog. Barring large-scale legalization, our winking stoner-chic revival may be little more than a flash in the pan, but of this I'm certain: Wakeman's prodigious discography endures. Whether scoring feats of human strength, fanciful fairy tales, or radical kink, this headiest of headmasters still reigns supreme.