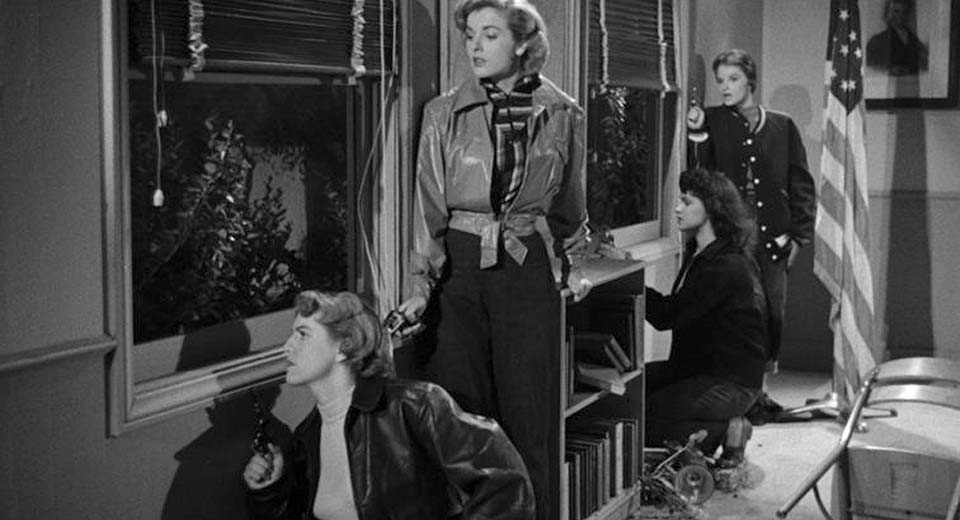 If you have any doubt that Ed Wood had a vision outside of the cumulative happenstance of the films he directed, then check out 1956's The Violent Years (directed by William Morgan) at Alamo Drafthouse Brooklyn tonight at 9:30 pm. Although Wood only supplied the screenplay for this sleazy exploitation film in “social problem” movie’s clothing, his psychic stamp is so potent that it easily sheds a demented light on the proceedings.

The story is a simple one: a teenage girl whose parents shower her with money and convertibles are too busy to spend time with her. Instead of having heart to hearts with attention starved Paula (Jean Moorhead), mom and dad choose to work long hours at the newspaper editorial desk and organize charities. Truly Monsters. In the absence of parental affection, Paula gets addicted to “thrills” or “kicks” as they’re sometimes called. She and her gang of teenage delinquents rob gas stations and terrorize innocent couples at make-out point (the girls forcing a young man to strip at gunpoint, a Wood hang up that returned in his 1969 sex comedy Love Feast). When the girls find out that the jig is up on their gas station crime spree they accept a job from a local fence. The girls are tasked with vandalizing some school rooms for a mystery client who doesn’t mind if some flags get destroyed in the process, comrade. The plan goes south and all hell breaks loose, finally resulting in a sanctimonious and preposterous ending almost too insane to be dubbed melodrama.

It’s all pure Ed Wood: a lot of ideas that don’t really mix and an ending that drops a morality bomb on what was essentially a cheap and naughty work of pulp—something akin to stapling a page from the Book of Revelation to the back of an issue of True Crime Comics. The Violent Years, like the films Wood directed himself, is filled with anti-social desires and moments of reckless abandon mingled with guilt, shame, and eventual punishment. Maybe more than any of the other works by Wood, this seemingly innocuous exploitation movie makes the complicated world of the artist most clear, that of a hapless sinner intermittently laughing and crying in the confessional.