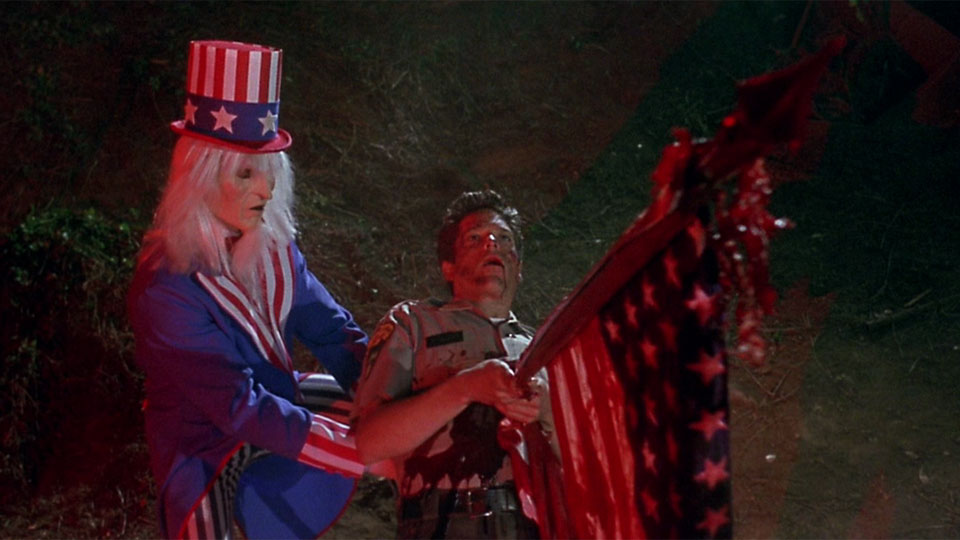 According to screenwriter Larry Cohen, Uncle Sam began in the entrepreneurial American International Pictures tradition of starting with the idea for a promotional image: in this case, a riff on James Montgomery Flagg's iconic 1917 propaganda poster with an undead Uncle Sam commanding, “I want you… DEAD!”

Could the message resonate any stronger than it does today, the most mad and macabre Independence Day any of us could expect to see? Our humble movie newsletter already addressed the Republican party’s endorsement of genocidal sacrifice in early April. Three months and more than 130,000 American deaths later, on the eve of the 4th of July, NBC News reported that the White House is preparing to focus on a new message: “We need to live with it.” Which is of course another way of saying: get used to dying.

Released directly to video in 1996, its promotional image rendered with an eye-catching lenticular morphing effect, Uncle Sam re-teamed Cohen and director William Lustig, the Jordan and Pippen of high-concept trash, for a victory lap after the conclusion of the Maniac Cop trilogy. The films’ namesake slashers share a supernatural revenge motive. In Maniac Cop, a sociopathic, homicidal police officer is sent to be killed in the general population in Sing-Sing by the convicts he brutalized. In Uncle Sam, a sociopathic, abusive soldier killed in a friendly fire coverup during the Gulf War returns home in a casket only to rise and terrorize his small town’s Fourth of July celebration. In both cases, fundamentally hateful people find an outlet in state-sanctioned violence, only to be discarded when their usefulness as instruments of brutality runs its course or they become inconvenient — busted cogs in a machine thirsty for death.

Many reviewers have claimed Uncle Sam’s politics are incoherent because its villain indiscriminately kills across the political spectrum. I think that’s based on the misguided assumption that all politics are necessarily driven by ideology rather than, say, a fundamental, universal hatred of humanity. It’s like saying Trump’s politics are incoherent because he compulsively torments former (and current) Republican members of his administration. It’s a sociopathic, ego-centric politics of sadism for its own sake. In 2020 the concept of Uncle Sam aimlessly running around on the Fourth of July killing everyone in variegated, inventive, and gruesome ways checks out.

It is, of course, tempting to locate an analog for Trump in any political work under current assessment. Uncle Sam has one — a fittingly minor, pathetic sex pest, a tax attorney who is dating Jody’s mom. (Poor Jody’s aunt, Uncle Sam’s widow, is dating a cop.) At dinner, he brags about overwhelming the court system by burying it in paperwork to uphold his tax shelters. “You mean you cheated them?” Jody asks. “I’m just smarter than they are,” he says — anticipating Trump’s own debate line about how not paying federal income tax, “makes me smart.” Following this, he pivots to the Fourth of July parade, where he will, of course, be playing “Honest Abe.” His death doesn’t even warrant an on-camera appearance.

The glaringly obvious argument at the center of Uncle Sam is that American patriotic iconography is, at best, an arbitrary vehicle for whatever sentiments people want to project on to them. Like Michael Meyers’s face, Uncle Sam is a blank canvas masking death. Happy Fourth of July!