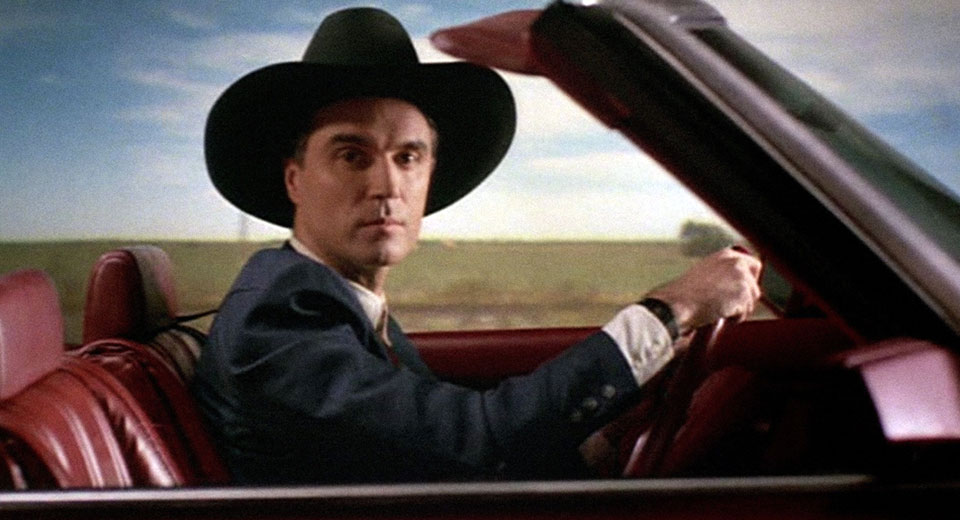 It is hard not to fall head over cowboy boots in love with David Byrne’s impressive first film True Stories. Driving around in a red convertible and a cowboy hat, Byrne acts as our friendly guide through the town of Virgil, Texas and its Celebration of Specialness in honor of its 150th anniversary.

A celebration of specialness is, in fact, the only way to really describe the film, as it bounces happily along exploring what makes America, well, special. From jobs to architecture, the film pays homage to the true glory of four-car garages and parking, the majesty of freeways, the freshness of mall air, with the ultimate hope being to show what a small town looks like to a complete stranger.

Though the visual creativity which the Talking Heads have always been known for bursts from nearly every shot (the most splendid culmination being found perhaps in the mesmerizing fashion show) it’s the characters which give the film its absurd, yet strangely familiar, flavor. Ripped from a loose scramble of National Enquirer clippings, they are the sort of people one never is lucky enough to meet but can imagine finding hiding in some remote corner of America. As the film says, “if you can think of it, it exists somewhere.” From the woman who spends her whole life watching television, to a young John Goodman as a good-hearted and lonely cowboy looking for love, to the lady who can’t help but tell fabulous lies, they, and a few other captivating creatures give the film its dazzlingly unique color. Creating a bizarre, but sincere world, one which contains equal parts honesty and exaggeration. Where truths and people are exaggerated not in order to judge, but rather to give us some distance, so we can see the mundane with fresh eyes.

And while the collection of delightful characters may drive the work, the film’s real charm lies in its infectious and refreshingly cheery tone. Though labeled as a mock documentary/musical, the film does not mock much, but rather seems to possess a genuine, giddy curiosity about the place and its people. Pointing out obvious shortcomings, but also reminding us that they, after all, are (as John Goodman so unforgettably sings) “People Like Us.” Letting us see the problems that continue to plague us even now, decades later, but also showing us a new shade of loveliness, a childlike wonder at the peculiar and unequivocally American mess of it all.